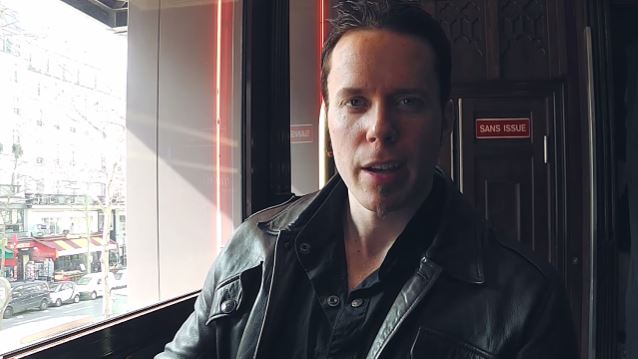 Metal-Impact.com recently conducted an interview with KAMELOT singer Tommy Karevik in Paris, France. You can now watch the chat below.

Speaking about the lyrical concept of KAMELOT's new album, "Haven", Karevik said: "It's not the same kind of thing like [2012's] 'Silverthorn' was; it's not like a chronological thing, from A to B, with characters and stories and stuff like that. It's more a thematic thing this time. It's more… We wanted to portray this world that we're living in and how fast… it starts spinning faster and faster, with all this social media. People's expectations are just getting higher and higher — lifestyle, being up to date with everything, being entitled to everything in the world. Everyone feels entitled to have ten TVs, travel the world seven times… careers… It's just spinning faster and faster."

He continued: "What I see is that we're getting more and more egoistic, to a point where something bad's gonna happen. And this album, we try to portray this dark place, where we just take what we want all the time. But the most important thing is that it's only this dark place. There's always hope, there's always something lighter, something brighter at the end of the tunnel that you want people to know, to feel that we can change this situation; together we can make it. In this darkness, somewhere in this darkness, there is a hope. The whole album is like a journey, I think — very different moods: dark, uplifting, sweet, melancholic all the time. Even in the same song, there are different moods."

Karevik also talked about KAMELOT's musical progression since the release of "Silverthorn". He said: "I'm really proud about what we achieved here with ['Haven']. I really think it's a really, really good album, and it turned out perfect for what we wanted to achieve. We did some new stuff. We always want to try some new stuff with every album, but still keep true to the KAMELOT signature sound, and I think everyone did a superb job with this album."

"Haven" sold around 7,600 copies in the United States in its first week of release. The CD was made available on May 5 in North America and May 8 in the rest of the world (excluding Asia) via Napalm Records as part of an exclusive licensing deal through the band's Kamelot Music LLC.