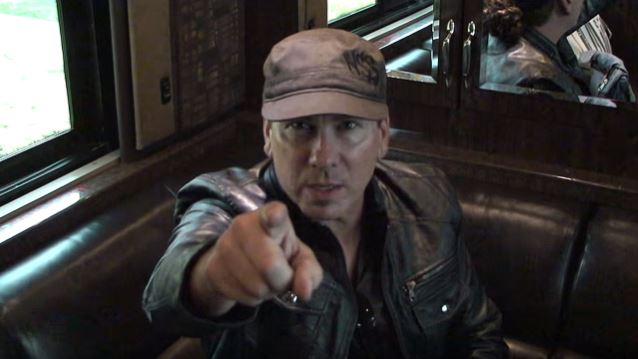 HardrockHaven.net recently conducted an interview with KAMELOT guitarist Thomas Youngblood. You can now watch the chat below. A couple of excerpts follow (transcribed by BLABBERMOUTH.NET).

"It's been going good. You know, the record business is changing nowadays, so bands aren't necessarily on labels for ten years in a row like they used to be. But we were free for this record [2015's 'Haven'], and there was a couple of labels that really wanted to have the new album. So Napalm was, in our opinion, the right choice, with everything… all the criteria that we needed — whether it be belief in the band, prority, budgets… [The album was released in] five or six vinyls, mediabook, earbook, which is this big… And it's all really cool stuff. We had this one box that sold out in, like, fifteen minutes. I was, like, 'You guys should have made more. I told you.' But, yeah, our fans have never had that opportunity. It's always either been a digipack or maybe a vinyl. So to be able to offer more variations on the album was something that we were really looking forward to."

On whether it's weird to think that KAMELOT has already been in existence 25 years:

"In a way, but not really, because time is flying. You'll see tonight. The energy and everything for the band is just… We're at our top when it comes to our game and our live show, and I think since [2012's] 'Silverthorn', I almost feel like there's a new era for the band. So, yeah, occasionally, I think about it, and, of course, I'm really happy that we're still doing this. But I also am one of those planners, and I like to look ahead and think about the future. So that's also one of the reasons why, I think, the band has been able to evolve with each record and stay relevant, and grow the fan base, but keep the fans we have."

KAMELOT will return to the road for the second leg of its North American tour in November and December.