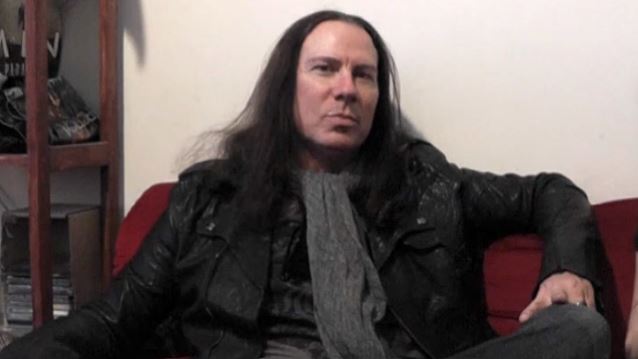 On March 19, Kati Rausch of Music Interview Corner conducted an interview with KAMELOT founder and guitarist Thomas Youngblood in Helsinki, Finland. You can now watch the chat in two parts below.

Asked what the craziest thing was that he has ever done on tour, Thomas said: "We were going through Switzerland one year, and the bus that we had actually had a sunroof kind of thing. So one of us decided to go climb out on top of the bus as it was going down the highway… [Laughs] I wasn't the first one [to get up there], but I was the second one. And in hindsight, that was really stupid. But that sticks out as one of the craziest and probably stupidest things we've done on tour."

KAMELOT's new album sold around 7,600 copies in the United States in its first week of release to land at position No. 75 on The Billboard 200 chart. This mark's the biggest first week in the U.S. in KAMELOT's history.

Commented Youngblood: "We want to thank our fans first and foremost for this great result. It's been an amazing start to the campaign and we are really loving the live shows so far. We also want to thank the folks at Napalm Records and our own social team for their work getting the news out regarding 'Haven'."