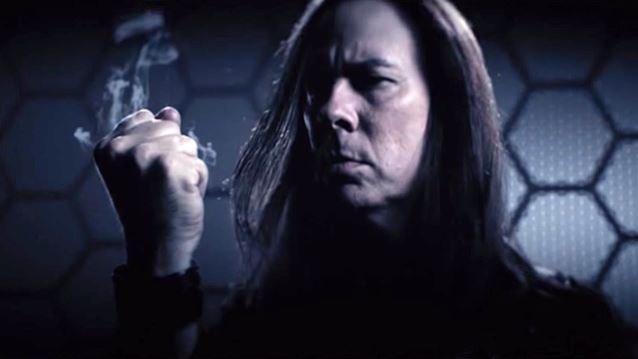 Daniel Fox of Metal Temple magazine recently conducted an interview with KAMELOT guitarist and founder Thomas Youngblood. You can now listen to the chat in the YouTube clip below.

Asked what message he has for the people who haven't fully embraced KAMELOT's new singer, Tommy Karevik, following the departure of Roy Khan, Thomas said: "I don't really even think about it or worry about it, to be honest with you. The band has actually grown since [2012's] 'Silverthorn' [album], so that percentage of fans that may or may not be onboard, I mean, what can… There's nothing I can say about it."

He continued: "From Day One, we were given a situation that we reacted on and there's no looking back.

"I'm one of those people that never really lets someone else determine my future. So we made the decisions, and, to me, the absolute best decision, going with Tommy. And, like I said, we've actually been touring more countries than ever before. And you can talk about record sales and stuff like that, but that's not the only way you judge growth or success. So the band has grown in all aspects, so there's no complaints on my side."

KAMELOT's new album, "Haven", will be made available on May 5 in North America and May 8 in the rest of the world (excluding Asia) via Napalm Records as part of an exclusive licensing deal through the band's Kamelot Music LLC.