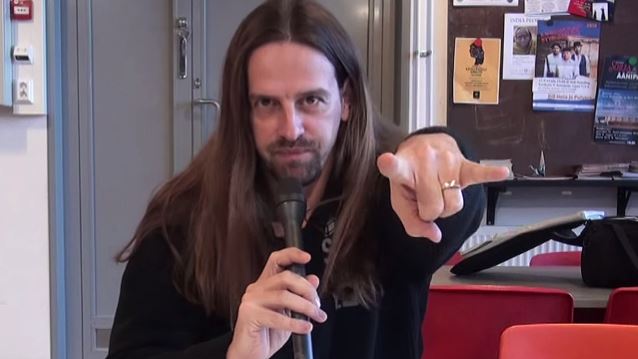 Kaaos TV conducted an interview with KAMELOT keyboardist Oliver Palotai on October 2 at Rytmikorjaamo in Seinäjoki, Finland. You can now watch the chat below. A few excerpts follow (transcribed by BLABBERMOUTH.NET).

"Spotify is not good. It's just that… I mean, you heard probably about how many thousand times a song has to be played until we get, like, ten cents or something; it's ridiculous how low it is.

"I always say I try to embrace new technologies, because digital streaming has its advantages. But this is so ridiculously bad. We just recovered from that whole illegal-download blow, which was really bad for the music industry and for the bands in the end, because we are, in a funny way— or not-so-funny way — the weakest part in the whole link, because we don't know the money business so well. And there was just that light on the horizon, and then came Spotify. And it's, like, again another blow, which is really bad. I hate that stuff. I hate the fact that they don't distribute the money well. And we're really not rich rock stars. People think us to be. There's a few bands which make really a lot of money, but even a band at our size, we have an income by that [Spotify], but none of us can live on that income. So if it makes it even harder, if it's getting down, I think so many bands will just cease to exist."

On how KAMELOT has been directly affected by the fact that digital music sales are continuing to fall as the music business inches closer to an access-over-ownership model:

"Well, big time, in many ways. The production budgets, the contracts from the labels, for example are… Usually you get a contract for one record. In the past, it was three or four, so you could develop a vision over years. Let's say a young band, a new band, could depend on a certain money coming from the labels to develop their musicality, to develop the idea behind the band, and this is all now not possible anymore. And, in my opinion, it lowers the quality of the music. But it's hard to compare, because everything is getting weaker in a way, you know what I mean? In the metal realm, luckily, we're still selling albums, because people wanna have the whole product. That's also why we put a lot of effort into graphics and presenting cool earbooks and LPs and stuff. But I really hope it's not getting any more difficult, because then, I think, it would really be hard to continue."

On whether it's harder for younger bands to survive in the music business today:

"It is super, super hard, I think. And if I see the support bands we had over the years, so many I never, ever heard from [again]. Okay, that's not always the reason — because of the business — it can also be bad songwriting, or just the whole concept is not good. Or sometimes people go out on tour and they see, 'Wow, this is not our lifestyle.' It appears so cool from the outside, but there are so many downsides to touring and to the whole life on the road. But, financially, it's super hard for those bands. Some of them are, after a couple of years, so much in debt, so much in the minus. I wish it could be a bit easier to develop your band personality and history in the business."

On how diminishing recording budgets have affected bands like KAMELOT:

"Well, I can't really speak for KAMELOT. For us, it got better over the years, over those almost two decades. But I produce a lot of other bands, and there I can see that the money was cut, actually. I mean, there are some developments in the digital realm — like the big studios, many of them died. And I can do, as a producer, mixer and orchestrator, I do a lot of at home what would have been impossible in the past. There are those libraries, so you can do so much on the computer for less money, so that's catching it a little bit at least. But, again, like I said, it couldn't go any worse… And to do these things just for a hobby… That's, again, it's lowering the overall quality. You have to spend so much time in a production. Songwriting, all this stuff takes so long. A good mix takes weeks. That all costs money, like everything else."

KAMELOT's latest album, "Haven", sold around 7,600 copies in the United States in its first week of release.

KAMELOT is currently on a massive world tour, with a number of shows scheduled for October as part of the band's biggest European headlining tour to date. KAMELOT will then return to the road for the second leg of its North American tour in November and December.