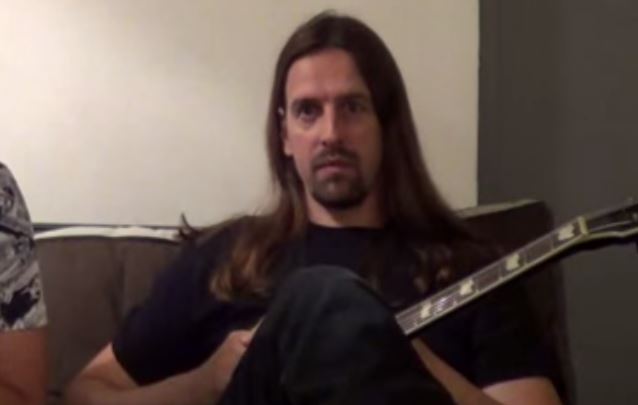 United Rock Nations conducted an interview with KAMELOT keyboardist Oliver Palotai on September 17 in Paris, France. You can now watch the chat below.

Asked if he is happy with the response to KAMELOT's latest album, "Haven", Oliver said: "It's like anything: when the work is done, I've written songs and produced the album for a year, or one and a half years, for a while, I don't wanna have anything to do with it, and the label starts working. Then we get those charts entries. And the Billboard chart placement in the U.S., that was surprising, because that was the No. 1 in the U.S. That's a great thing which we never achieved [before]. I was happy about that. But I must say, for me personally, when I meet my own standars regarding songwriting, orchestration, producing, mixing and stuff, I'm already happy. Commercial success is great, and thanks a lot to the fans who buy the album, but my work is kind of done when I deliver the album."

Produced by Sascha Paeth and mastered by Jacob Hansen, "Haven" is a massive album that is sure to please critics and fans alike. Guest musicians on the CD include Alissa White-Gluz (ARCH ENEMY, ex-THE AGONIST), Troy Donockley (NIGHTWISH) and Charlotte Wessels (DELAIN). The breathtaking cover and artwork was created by Stefan Heilemann and additional art/layout was done by Gustavo Sazes.