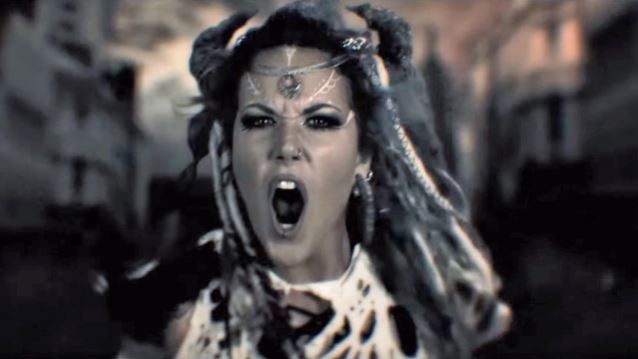 "Liar Liar (Wasteland Monarchy)", the new video from American/German/Swedish symphonic metallers KAMELOT, can be seen below. The clip, which features a guest appearance by Alissa White-Gluz (ARCH ENEMY, ex-THE AGONIST), takes off where KAMELOT's "Insomnia" video ends and takes the listener into the outside environment of this dystopian world, where the citizen is zero and only the privileged live in a lavish lifestyle. Surveillance over society is everywhere; even a fly on the wall can be the watching eyes of the monarchy. Only a revolution will make a change!

"Liar Liar (Wasteland Monarchy)" is taken from KAMELOT's latest album, "Haven", which sold around 7,600 copies in the United States in its first week of release.

Produced by Sascha Paeth and mastered by Jacob Hansen, "Haven" is a massive album that is sure to please critics and fans alike. Additional guest musicians on the CD include Troy Donockley (NIGHTWISH) and Charlotte Wessels (DELAIN). The breathtaking cover and artwork was created by Stefan Heilemann and additional art/layout was done by Gustavo Sazes.