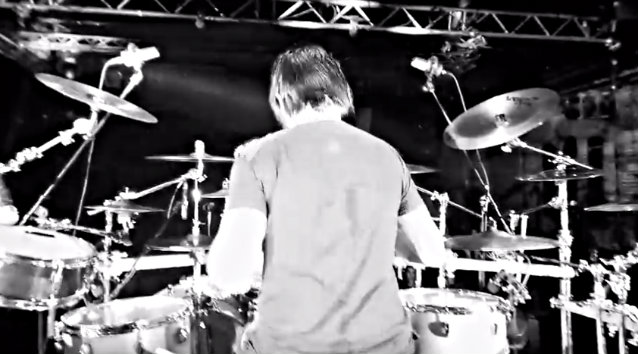 Drum-cam footage of KAMELOT drummer Casey Grillo's solo from the band's November 6 concert in Tampere, Finland can be seen below.

In a recent interview with The Drum Circle, Grillo was asked if there were any songs on KAMELOT's new album, "Silverthorn", that were especially challenging for him to play. "Not really hard to play," he replied. "Everything is straightforward on the drum parts. I think the fastest song is around 172 bpm, so nothing too fast, just some endurance, and when you get fired up in front of a crowd, that's not a problem. As for picking the songs, we would have loved to have done the entire CD."

Grillo was also asked if KAMELOT's new lead singer, Tommy Karevik, is a big reason why "Silverthorn" is Casey's favorite KAMELOT album. "Tommy is one factor for that reason," Casey said. "'Silverthorn' has so many great songs. Tommy's melody lines and lyrics are just amazing. Having new blood in the band makes us want to tour and do things together. Tommy is such a great guy and becoming a great friend to each of us. The future is looking great!"

"Silverthorn" sold 5,400 copies in the United States in its first week of release to land at position No. 79 on The Billboard 200 chart. The band's previous CD, "Poetry For The Poisoned", opened with around 6,100 units in September 2010 to enter the chart at No. 74.