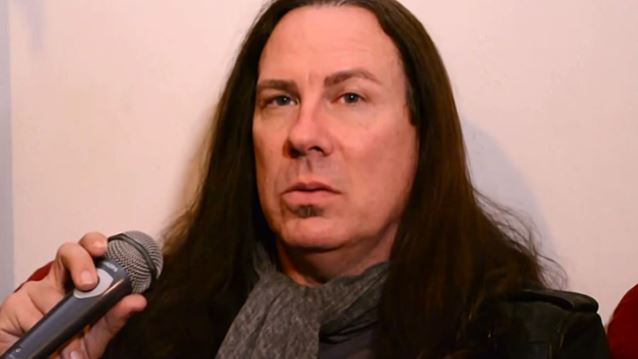 Kaaos TV recently conducted an interview with KAMELOT founder and guitarist Thomas Youngblood in Helsinki, Finland. You can now watch the chat below.

Asked if still pays attention to reviews of his band's music on various online magazines, Youngblood responded: "You have to kind of take each one with a grain of salt. In other words, if you get a bad review, or a good review, you've gotta kind of weight the merits of each one. What drives me crazy sometimes is when you see that somebody does a review of, for example, a KAMELOT record, but their favorite music is black metal or rap, or whatever. It's funny when sometimes people ask somebody at their webzine to review something that they really have no will to do it, and it doesn't make sense, so you always kind of look at that stuff, too, when it comes to reviews. I did an interview earlier today with a longtime KAMELOT fan, and those are the kind of people that they know a little bit more about judging what each record's been. And if there's a metal fan that has never heard of KAMELOT, it's always a great thing if they dig the record 'cause they're finding out about the band in a new light, and that's also super important."

Youngblood also talked about the differences between KAMELOT's latest album, "Haven", and the group's previous efforts. He said: "On 'Haven', we kind of wanted to add some more modern metal elements, along with making sure we keep the KAMELOT sound, but also to be diverse and add some new components that we haven't had in the past — like some industrial things, [and] there's some folk influences on there. But all along, we always wanna make sure we keep the signature KAMELOT sound."

KAMELOT's new album sold around 7,600 copies in the United States in its first week of release to land at position No. 75 on The Billboard 200 chart. This mark's the biggest first week in the U.S. in KAMELOT's history.