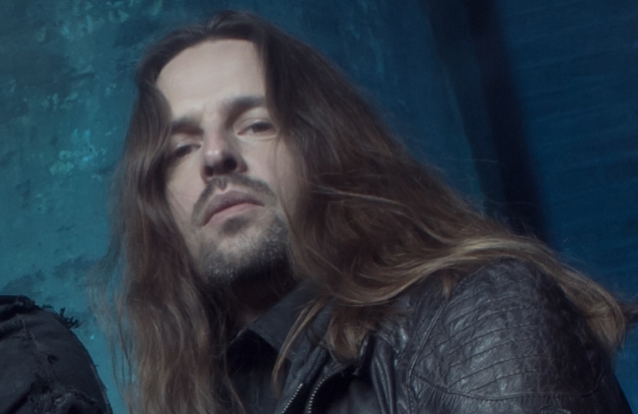 KAMELOT keyboardist Oliver Palotai recently spoke with Finland's Metalliluola. The full conversation can be streamed below. A few excerpts follow (as transcribed by BLABBERMOUTH.NET).

On the group's latest album, "The Shadow Theory":

Oliver: "The creation of the album was not without troubles. Some albums are just born under difficult circumstances, and I was a bit nervous about the reception, but it's going really good. The U.S. has partially doubled in audience. We're going now also to places where we haven't been for many, many years, rebuilding stuff and getting bigger in other places, so obviously, the fans like it, so we're happy about it."

On whether he senses an uptick in interest in symphonic metal:

Oliver: "I have so little insight into the scene and what's going on, really, that I can't tell. Of course, that's what everybody's hoping for – that their style is getting more popular. I don't have a clue, honestly, how it looks in the scene."

On the evolution of the band's music:

Oliver: "It's getting much more complex. There's a lot of stuff you basically don't hear. If you put on really good headphones, then you hear it. There's so much going on, but it still is important for the atmosphere. When you take the songs from the first albums like 'The Fourth Legacy', there are some fans requesting songs from there, and we try to play it two or three times — especially 'The Fourth Legacy' itself — and it never really works, because it sounds pretty thin compared the new songs. It's great when you listen to it on the albums, but if you put it live up right beside the new songs, it's not working. The orchestration is so minimal compared to what I'm doing on the newer records. It's a massive difference."

On writing the orchestration for the band:

Oliver: "It's a lot of work. I work about one year on it, but it's what I do on a daily basis, almost. I'm a producer, and that's what I do, and what I love to do — being in the studio all by myself and working."

On whether the group has considered adding a female vocalist on a full-time basis:

Oliver: "It could be, maybe, an option, but of course, changing singers from time to time adds new elements for the fans to explore. [It's] always been something like one or two album cycles, and then we look for somebody different. I would be up for a full-time female member, but it's not my decision, honestly."

Oliver: "He's one of the top metal drummers out there. Johan [Nunez] only played two shows with us on the U.S. tour, and then he got these... I don't know, I think it was some health problems, also some family stuff, so Alex was like [an] emergency replacement. He was flying in, learning the songs in an incredibly short time. He played with us when we were supporting IRON MAIDEN, and now he's with all the time. We're still in contact with Johan, seeing what's going on, and then we'll see how it turns out. The drummer is keeping it all together. The drummer is the glue on stage, especially with a metal band. It's so, so crucial. What's also important is the personality, if you have somebody is self-confident, smiling. I often check with Alex; sometimes we're joking on stage. It's so fantastic. Behind the tour, he's a super-funny guy... he's so not afraid of making fun of himself. Really, really cool guy, and I hope he stays."

Oliver: "Honestly, we don't have much contact, with I'm often sorry for, but he withdrew totally from the whole metal scene. It's weird — after being really good friends and touring for so many years, and then suddenly, total change, totally off. Weird story."

On whether the band plans to do any special shows to celebrate the upcoming twentieth anniversary of "The Fourth Legacy":

Oliver: "Honestly, I doubt it. We are in that lucky position that so many fans, they often don't know the songs from before the Tommy [Karevik] era. Our whole crowd has changed. There are some fans from the old times... but most of the people, they know stuff from 'Silverthorn' on, when Tommy entered the band, which is really cool. I was before in a band who had to play the old songs from 20 years ago over and over and over again, and everything new, we were throwing out the setlist after a few gigs, because the fans were not interested in the new stuff. With KAMELOT, the cool thing is that people know the new songs, so I doubt very much that we're going to [do any anniversary shows]."

Prior to joining KAMELOT in 2005, Palotai – the husband of EPICA vocalist Simone Simons – performed with artists including DORO, CIRCLE II CIRCLE and Blaze Bayley's BLAZE.