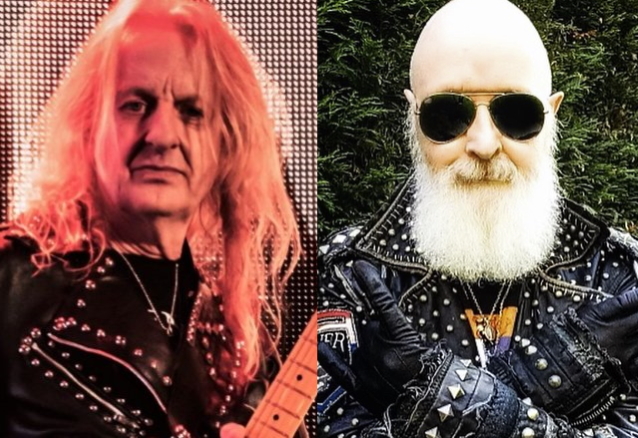 Former JUDAS PRIEST guitarist K.K. Downing, who officially left the group in 2011, said that there was talk, around a decade ago, of him continuing to collaborate with some of his former bandmates on other projects.

"Not many people know that, but [PRIEST singer] Rob [Halford] and his manager sent me a letter after I walked out asking me to join a band with Rob," Downing said during an appearance this past Tuesday (September 21) on SiriusXM's "Trunk Nation With Eddie Trunk" (as transcribed by BLABBERMOUTH.NET). "Rob was gonna come back to England and he wanted to come and see me about forming a band with three guitar players — with me, Roy Z and Jeff Loomis [ARCH ENEMY, NEVERMORE] — with a very good drummer and bass player. But I ignored the letter; I didn't see Rob… This was March [or] April 2011."

K.K. first revealed Rob's intention to form a side project with Downing this past June in an interview with Rock Hard Greece. At the time, he said: "A couple of weeks after I walked out, Rob and his manager wrote me a letter. They wanted me to form a band with Rob and some other musicians. Jeff Loomis was one. I can't remember the names. But I've got the e-mail… I just ignored it."

Asked what he thinks led Rob to approach Downing about forming a new band, K.K. told Rock Hard Greece: "You have to ask him. No one asks them questions. No journalist asks the other guys questions."

Downing left PRIEST amid claims of band conflict, shoddy management and declining quality of performance. He was replaced by Richie Faulkner, nearly three decades his junior.

KK'S PRIEST's debut album, "Sermons Of The Sinner", will be released on October 1 via Explorer1 Music Group/EX1 Records.