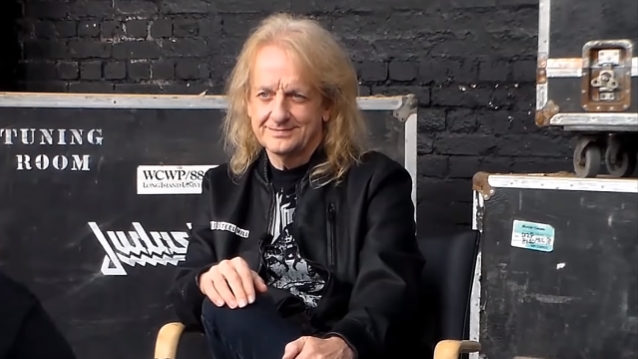 K.K. Downing recently sat down with Metal Matt for a lengthy interview about the former JUDAS PRIEST guitarist's new memoir, "Heavy Duty: Days And Nights In Judas Priest", in which he allows the audience to get an inside glimpse of his life as a member of the iconic heavy metal group. You can now watch the chat below.

Asked what PRIEST album epitomizes what the band is all about, Downing said: "I get asked this quite a lot, and it's so difficult — it is really difficult. But I think, if I can just elaborate a little bit on that, I think I've got to go with 'British Steel'. I've got to do that, because I think that that was the album for JUDAS PRIEST that consolidated everything. Because it was the first album that JUDAS PRIEST was completely… had the leather-and-studs look. Everything on that album is quite complete for PRIEST. I think just prior to that album, it was just myself and Rob [Halford, vocals] that were kind of wearing leather and stuff, and then suddenly, thankfully, it just came together.

"When I was growing up, when I was a kid, my two sisters used to drive me mad listening to THE BEATLES and Elvis [Presley] and Cliff Richard and all that stuff. And I became aware that a lot of these bands all had a uniform look — they all had the same clothes, the same haircut and everything. So, what did we all do as blues-rock musicians? We thought we'd go out there and we'd all have our own separate identities, and that's what we'd do. And go back through history and look at the bands — [LED] ZEPPELIN, TASTE, FREE; whoever it is — everybody's got their own, 'I'm gonna wear this tonight.' Because we didn't want that kind of uniform look. And then, as we kind of were evolving as a band, I was always kind of dark, heavy and moody — it could never be heavy enough; the heavier the better, whatever it is. We had a great name for the band — JUDAS PRIEST — the songs were great, all of that was evolving, but along the way, the clothes kind of stayed the same in a way. They were kind of bright and eclectic color-wise — yellows, pinks, greens… And sometime in the mid-'70s, I'm thinking, 'It's not right. It's not right. Surely what we do in here, the color for us has to be black.' I'm thinking, 'It has to be black.' So I'm thinking, 'I'm going black.' By that time, I was wearing black leather boots and stuff. I did have some white ones made that were really cool. The leather thing a bit more came into it — black leather. And I don't know what happened, and I'm thinking, 'But I want people to see me. I'm gonna stick some shiny stuff on there. It's gotta be metal studs,' whatever.

"I was always one of those guys — I mean, just elaborating a bit too much — but in the mid-'80s, I was going to the hardware store and buying studs and knocking them into my guitars," he continued. "More studs, more metal — I was always like that. But then it came to me, the fact that what what we really need, this band really needs, we do need a uniform look, 'cause it'll make us more powerful. I'm thinking our image will be… When we go out there, it's like an army platoon or whatever — something that bonds us all. And I'm thinking, 'That needs to be worked on a bit.' And I was absolutely right, because proudly, when we were waiting to go on stage — wherever we were in the world — and I would look at my bandmates who were there with all this leather and studs… We weren't exactly the same — we all had our different clothes — but the common denominator was leather, black and studs. And I'm thinking, I can see the lights glittering on us, and it just felt really powerful. And we went out there in a kind of regimented-look type of way, and that's what we really did need to have. And, of course, then, really proudly, it was great that that spilled over into the audience — the audiences took denim, leather and studs, and the metal army was being born. So it's fantastic it all happened."

Downing added: "So, going back to the question, obviously, all of that really did come to fruition with 'British Steel', because we had then a great band name, a great album — we felt we just made a really good album. A great… We didn't really know it at the time, but the album cover… metal… And then we had the look. So everything came together. And we went out there, and I really do think metal was really, truly made — was born and made — and we set sail on that 'British Steel' tour. So, it's gotta be that album, I think, really. Everything before was getting to that point, and everything after was a result of that point."