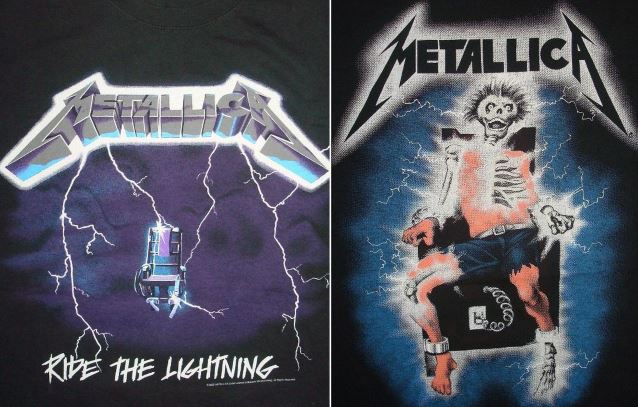 According to 9news.com, an alternate juror wore a METALLICA "Ride The Lightning" shirt — featuring an image of a man being executed in an electric chair — while listening to evidence Thursday (July 23) in a Centennial, Colorado courtroom meant to help decide whether to sentence to death James Holmes, who is accused of killing 12 people in an Aurora movie theater.

Judge Carlos Samour, who apparently didn't notice the t-shirt worn by juror 983, previously issued an order requiring all spectators to observe proper courtroom, and has "strictly prohibited" any "display of insignias, symbols, pictures, clothing, or any other items that may influence the jury or which are intended to convey a message about a person, an issue, or cause."

Juror 983, who has reportedly worn heavy-metal-themed shirts in court before, is not on the panel of 12, but could be called on to deliberate if a juror should be excused for any reason.

The title track of METALLICA's second album, "Ride The Lightning" was written about someone convicted of murder and being sent to the electric chair, even though he didn't commit the crime. The lyrics are what is going through the person's mind. The songtitle came from Stephen King's book "The Stand", which guitarist Kirk Hammett was reading during the writing sessions for the "Ride The Lightning" album. He recalled to Rolling Stone: "There was this one passage where this guy was on death row said he was waiting to 'ride the lightning.' I remember thinking, 'Wow, what a great songtitle.' I told James [Hetfield, vocals], and it ended up being a song and the album title."