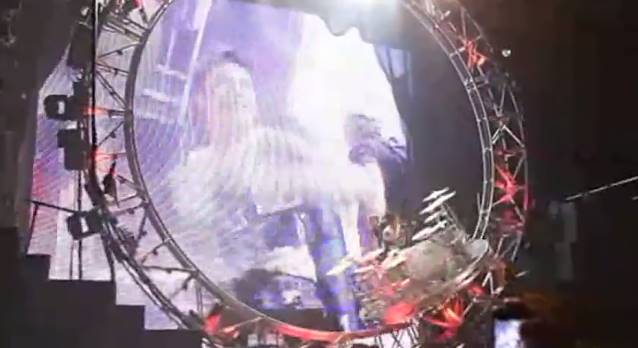 According TMZ.com, a judge has dismissed a lawsuit filed against MÖTLEY CRÜE by Howard Scott King, who claimed that he gave CRÜE drummer Tommy Lee the idea for the roller-coaster drum set which he has used on tour in recent years.

On September 20, 2012, King filed a suit against MÖTLEY CRÜE, the band's touring company and Tommy Lee as an individual for misappropriation of trade secrets in the Superior Court of California. The suit accused MÖTLEY CRÜE of unlawful use of King's proposal for a "Tommy Lee Loop Coaster."

In his complaint, which can be found as a PDF file at the Brooklyn Law School web site, King claimed that he developed the idea for the Coaster as part of his then-business Stages 'N' Motion. King described it as "a track on which [Tommy Lee] would play his drums on a platform on wheels which follow the track until Lee was in an upside-down position playing the drums and he would continue playing the drums as the platform followed the track in a complete loop." King alleged that he discussed a proposal for the Coaster with Top Rock Development Corp., MÖTLEY CRÜE's agents, on or about November 21, 1991. King claimed that both the proposal, as well as a signed confidentiality agreement (which has since been lost or misplaced), expressly stated that the ideas were confidential, and that King was to be compensated should MÖTLEY CRÜE implement the Coaster. In June 2011, MÖTLEY CRÜE begin using the Coaster, or a substantially similar device, as a centerpiece for concerts, as well as in commercials and other promotions.

According to TMZ.com, the judge has determined that King never had exclusive rights to the roller-coaster drum idea and Lee designed his version on his own.