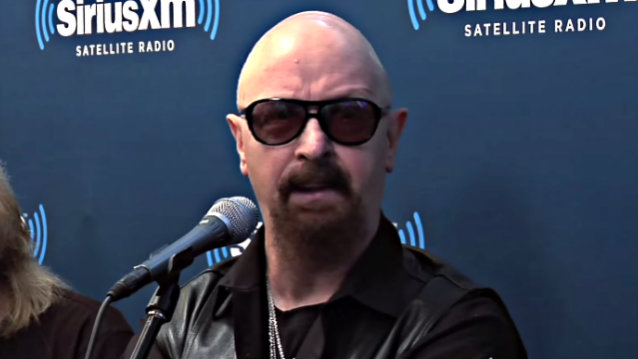 In a brand new interview with Rock Confidential, JUDAS PRIEST singer Rob Halford spoke about the departure of founding guitarist K.K. Downing and the addition of Richie Faulkner to the group's ranks in 2011.

"I've always said the band is more than one person," Halford said. "I still believe that. It's all about chemistry and it's all about the abilities you bring with your musical expertise. When you combine all of those things, it becomes part of a process. At the end of that process, you end up with a bunch of songs on a record.

"I can't say enough about Richie's contribution, musically. He's such a great guy and an amazing musician. He's a true player and can perform on stage and has amazing writing skills. Then there's the generation gap, which isn't a bad thing.

"On the last tour, I saw that guy on the edge of the stage just playing away and it was so exciting. It makes you react.

"If you can still pull together the elements of greatness, then surely great things will come of it, and that's certainly the case with Richie."

"I read [the Internet] message boards," he said. "Every day I read the PRIEST boards and at least a dozen metal web sites around the world. I read what people are saying about PRIEST. There is a tremendous display of passion and quite a serious tone attached to some of it as well.

"The elements of being aware of what is being expected from you becomes quite strong the longer you do it. You're backing yourself up to your most successful moments. You don't want to fail your fans or yourself or diminish in any way. It's extremely important in PRIEST that we're aware of that.