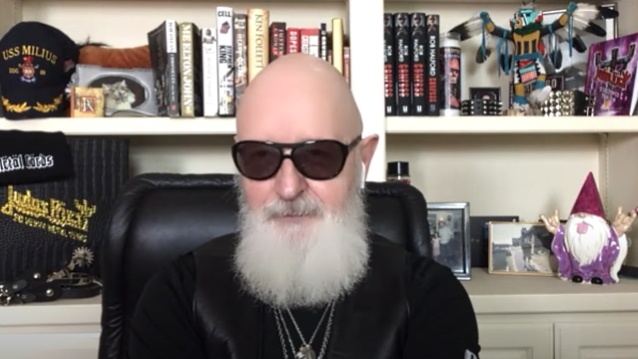 In a new interview with Ultimate Classic Rock, JUDAS PRIEST singer Rob Halford was asked what it was like to perform the title track of the band's debut album, "Rocka Rolla", for the first time in 45 years at last month's Bloodstock Open Air festival at Catton Park, Walton-on-Trent, United Kingdom. He responded (as transcribed by BLABBERMOUTH.NET): "I threw that out. We all had a list. I threw that out, and Glenn [Tipton, guitar] went, 'I don't think that's gonna work.' I said, 'I don't think it's gonna work either.' I said, 'But wouldn't it be so cool if we did it, because there is the title track of the first album this band ever made?' And so when we got up into rehearsals and we jammed it, and then Richie [Faulkner, guitar] put a bit of a twist on it — double tempo and made this little bit of an arrangement adjustment — I thought, 'Oh, man. This is definitely gonna work.' So when I did make a little tiny of a blab before we played that song at Bloodstock and then he came in, it just felt euphoric. We'd never, ever, ever in the history of the band played it live, and yet here was… That was when your foot connected with the heavy metal football, and the game was on. So I really loved that.

"I'll tell you what I liked about the arrangement," he continued. "On the flight back to America, I was watching this really cool show that Robert Plant did with the SENSATIONAL SHAPE SHIFTERS at Austin City Limits, and the way that he takes the [LED] ZEPPELIN material and he restructures it. There are still important aspects of the songs that you connect with, but he takes you on a little bit of an adventure. And that's what I felt. When I was on the flight back, I was thinking about 'Rocka Rolla'. And then my mind's going, 'Is there anything else we can do like that?' What's another track that we can possibly look at that might take that kind of twist from something way back in the '70s to 2021. Endless opportunities in music."

For the Bloodstock Open Air appearance, JUDAS PRIEST was rejoined by Tipton for three songs.

Tipton was diagnosed with Parkinson's seven years ago — after being stricken by the condition at least half a decade earlier — but announced in early 2018 he was going to sit out touring activities in support of JUDAS PRIEST's latest studio album, "Firepower". He was replaced by "Firepower" album producer Andy Sneap, who is also known for his work in NWOBHM revivalists HELL and cult thrash outfit SABBAT.