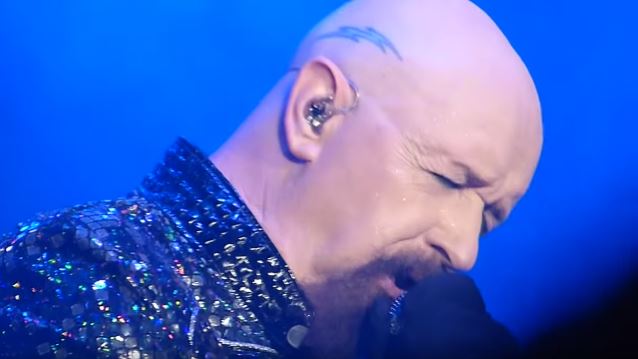 JUDAS PRIEST singer Rob Halford was recently interviewed on the Q104 radio station in Halifax, Nova Scotia, Canada. You can now listen to the chat using the SoundCloud widget below. A couple of excerpts follow (transcribed by BLABBERMOUTH.NET).

On JUDAS PRIEST's plans to record a follow-up album to last year's "Redeemer Of Souls":

"Well, you know, in rock and roll, you've gotta kind of strike while the iron is hot, and that iron has been burning hot for decades for PRIEST now. It doesn't show any sign of cooling off, I can tell you that. The cool thing about where we're at right now is, of course, having Richie [Faulkner, new PRIEST guitarist] with us and having gone through that first writing experience together [on 'Redeemer Of Souls']. We were so motivated to keep writing as we were going along, but our label had a time schedule for us to keep, so we had to put the brakes on and start recording the songs that we'd written. And with that in mind, we're raring to go again, and I'm sure there'll be another PRIEST record in the not-too-distant metal future."

"Who knew that this band would be still making metal over forty glorious years later. And in no short measure have we stayed this course without the most incredible fans that we have — all of our PRIEST fans. We know you guys have been following PRIEST, and some of you have made long journeys to come and see us in different places, so we owe you guys a debt of gratitude for looking after us for so long and keeping the PRIEST alive. And that's what we're doing now."

On whether he feels that "the clock is ticking" on JUDAS PRIEST's recording and touring career:

"Yeah, the clock is ticking, [but] we’re trying to hold it back. [Laughs] But it's great, man. I've gotta tell you, this band is having the time of its life, and we're very excited to be back out on the road after a short break from our last show, in Wacken in Germany at the big heavy metal festival there in front of eighty thousand heavy metal maniacs. So we're still bringing the fire and the metal with us wherever we go."

On how he keeps his voice in shape after all these years:

"Well, I don't know. I certainly don't have any kind of things I can sell in a bottle. [Laughs] If I could, it would be on Amazon. [Laughs] Singers will tell you that the voice… It's an extraordinary thing. Sometimes it's got a mind of its own. I always talk about it in the second person, because sometimes when I'm out there, I'm hoping and praying that it'll do the things that my brain is telling it to do, and it does most of the time. But, you know, when you're on tour, you have to be sensible — you have to get the rest that your voice needs to recover. And then just make sure that whatever you need to do, you make work so that you go out night after night and you deliver the goods, as we say in PRIEST. And that's not only for my point in the band — that's all of us. We have a great tenacity to wanna come and give you a hundred percent."