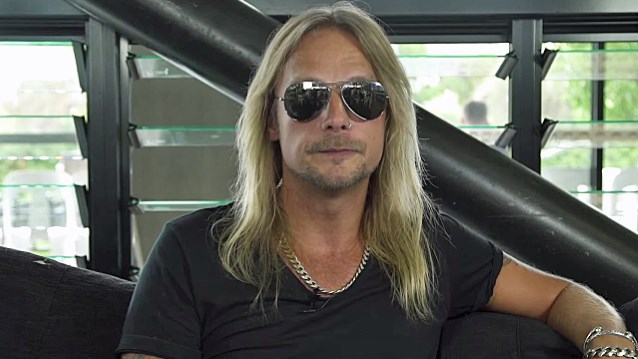 JUDAS PRIEST guitarist Richie Faulkner was interviewed by U.K.'s Metal Hammer magazine during this year's Soundwave festival in Australia. You can now watch the chat below.

Speaking about how JUDAS PRIEST was re-energized by his addition to the band following the departure of original lead guitarist K.K. Downing in 2011, Faulkner said: "The whole re-energizing thing, I can only take a fifth of the credit, really. The [rest of the] band, they've been doing it for forty years and they're so passionate about what they do. And, obviously, when you bring someone new into an outfit — a football team or a band — there's gonna be a slightly different dynamic. So that's the thing that's happened here. We went from the 'Epitaph' tour, and we got energized into doing a new record; we've done a new record, and then that energized you into going out and getting these new songs [into the setlist and performing them live on] the road. And then, in turn, you don't know what's gonna happen after this. We've talked about doing another record; we think we've got another record in us. And, no doubt, we'll be energized from the reception we're getting on the live circuit with this record around the world that, no doubt, we'll go in and do it again. I mean, I know we've got loads of ideas kicking around, and we've got the energy to do it, so you never know. Watch this space."

JUDAS PRIEST's latest album, "Redeemer Of Souls", marks the band's first release with Faulkner, who was most recently guitarist in the backing group for Lauren Harris (daughter of IRON MAIDEN bassist Steve Harris).