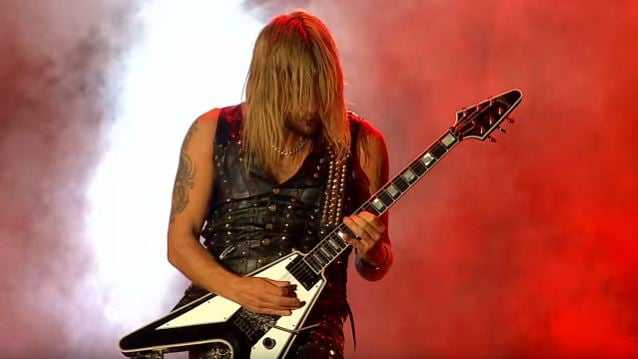 EMG pickups and Epiphone guitars have collaborated with Richie Faulkner of JUDAS PRIEST to give their faithful followers a new signature Epiphone Flying V guitar. Richie himself was kind enough to stop by The Music Zoo and offer a rundown of his new axe. Check out both videos from EMG and Epiphone to see this guitar in action.

Asked which PRIEST song has been most challenging for him to play, Faulkner told the Milwaukee, Wisconsin radio station 102.9 The Hog: "They're not challenging in the sense of… PRIEST were never — from a guitar point of view — they were never super technical. They were always tasteful, they were great melodies — you could sing the guitar solos. During 'Painkiller' and some of 'Ram It Down', they started to bring that kind of shred, sweep-picking stuff in. But up until that point, for me, they've always been about more melody than technicality, if you know what I mean. And so, because of that, the challenge is usually doing the duty to the legacy that went before — trying to recreate the vibe of the guitar parts. Playing the notes is fine — it's recreating the vibe and the energy that went into them and playing them for the fans. The fans have known these songs longer than I've been alive in some cases, so the challenge is capturing the vibe of the original and also putting your own stamp on it in some way as well. Which these guys… they were always about putting your own stamp on things, going against the grain, standing up for what you believe in and doing what you do a thousand percent. So if I didn't put that in as well, I wouldn't be being true to myself, true to the band, true to the fans and true to that ethos of heavy metal. So you respect what went before and put your own stamp on it if you can. So that's the challenge — doing it all in the right way. And hopefully I've been doing it in the right way. I'm still here."

PRIEST is currently touring North America in support of its latest album, "Firepower", which was released on March 9 via Epic.

The North American leg of the "Firepower" tour kicked off on March 13 in Wilkes Barre, Pennsylvania and will wrap on May 1 in San Antonio, Texas.