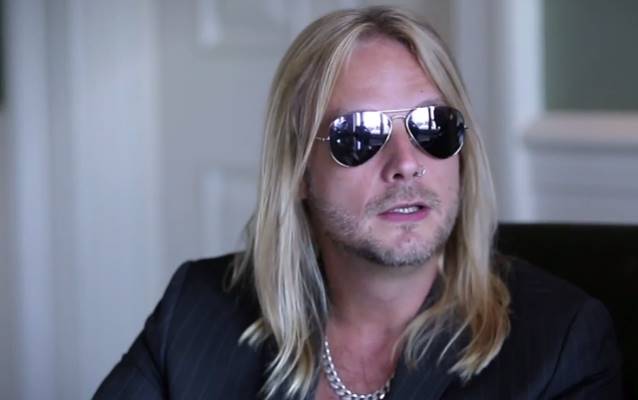 In a brand new interview with Metal Talk, JUDAS PRIEST guitarist Richie Faulkner spoke about the task of replacing original PRIEST axeman Kenneth "K.K." Downing and getting involved in the songwriting process for the band's new album, "Redeemer Of Souls".

"I grew up with JUDAS PRIEST, and guitar music in general, and I think being aware of everything that comes with that — the whole mindset of standing up for what you believe in, doing what you do, and being proud of it," Faulkner said. "That's been a part of PRIEST's music since day one for me, that's how I interpreted it.

"They have always flown the flag for what they do, and for metal. It was kind of inherent — you have to respect what came before you.

"Ken was a huge hero of mine, and then with Glenn [Tipton], and the rest of the guys in the band.

"It's almost second nature, if that makes any sense. It's not like it's an easy thing to do, but at the same time it's kind of organic. It's something that's ingrained in you as a musician, really. It's really natural and organic, and it's worked really well. I'm very pleased."

Faulkner also talked about living up to JUDAS PRIEST fans' expectations in the concert setting, especially after one half of the band's signature twin-guitar attack has been replaced.

"We just wanted the band to continue — we knew it was working, and we just wanted to get out and unleash it on the world," Richie explained.

"I think the skepticism that some people might have, or have had was just a testament to how passionate they are about the band, you know? It's almost the same as when Ritchie Blackmore left DEEP PURPLE, or when Michael Schenker left UFO. There was a healthy amount of skepticism that comes from that passion, and I think that's a healthy thing. That's a testament to the fans. And thanks to the fans for trusting in the band, buying tickets, coming down to the show.

"Within 30 seconds, man — they had their hands up in the air, and they're screaming along. It was just instant, really, so a big 'hats off' to them for doing that."