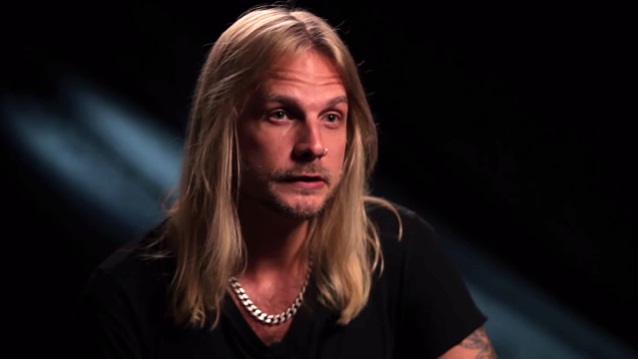 JUDAS PRIEST guitarist Richie Faulkner was interviewed on the July 11-13 edition of Full Metal Jackie's nationally syndicated radio show. You can now listen to the chat using the Podbean widget below.

Full Metal Jackie: Richie, you joined the band and toured first rather than writing and releasing an album. How did having that touring cycle under your belt benefit the whole "Redeemer Of Souls" writing and recording process?

Richie: I think it was a really valuable experience, really, because, as you know, when you're on tour with five or six guys and the crew, you get to learn people's characters pretty quickly; it's quite a condensed way of living for an extended period of time. So you kind of get to build trust and listen to others' opinions and just build a real sense of camaraderie over a relatively short space of time. So when you go into the studio on a creative level, all opinions and stuff is listened to and accepted. If you've got an idea, or you don't like something, or you're pushing for a certain idea that you really believe in, you've already built up that camaraderie and that trust that you can put your ideas forward and be comfortable with the fact that they're going to be listened to and appreciated. And you return that favor in kind.

Full Metal Jackie: Richie, creatively, JUDAS PRIEST worked as a songwriting collaborative between Rob [Halford, vocals], Glenn [Tipton, guitar] and K.K. [Downing, guitar]. Was there a consciousness on your part about maintaining an established style? Or was your input just a pure flow of creativity?

Richie: Well, I've been brought up on a healthy diet of PRIEST and [IRON] MAIDEN and UFO and [THIN] LIZZY and bands like that. So when I was learning how to write songs and create different parts, textures, musically, those were the guys that I looked to for inspiration and how to do it. So I kind of had a masterclass in how to write metal songs, if you like, from the masters. So when we got in the studio environment, it was very much organic and natural. I didn't have to put on a different hat or write in a different way. I was brought up on these guys, so it just came out of all of us. And also, we were all — me and Glenn particularly, and Ken [K.K.] — rooted in the blues, like [Jimi] Hendrix and Rory Gallagher, so we come from the same background, to some degree. And then they went off on their metal path, and I caught on to that as well. So, again, it was a very natural process; we didn't have to really think too much about it, [we] just let the creativity flow.

Full Metal Jackie: Richie, is there an even greater rush of excitement when you know your creative ideas will be brought to life by a band the caliber of JUDAS PRIEST?

Richie: You can always hope that the ideas that you bring to the table will make the record, or will even be considered for the record. But that moment when you've got some guide tracks down and the you've got the skeleton of the track there — it might need some refining, but the actual nucleus of the song is there — and you might have had the riff for six or seven months, you might have come up with it in your kitchen or your living room, and you put it down, and that moment where you've got Rob Halford coming up with vocal ideas for it, you're sitting there thinking, "This riff that I just had a few months ago is now becoming something much more than just an idea. It's becoming almost like a painting with sound," if you know what I mean, especially when Halford gets on it and Glenn gets his stamp on there. So there is a genuine feeling of excitement. I've got a few recordings on my phone, actually, where I put the phone on "record" while we were in the writing sessions. 'Cause I just couldn't believe some of the stuff that Rob was coming up with. And it's kind of distorted and it's really bad sounding, but you can hear those songs being born. Some of it ended up on the record, idea-wise, and some of it didn't, or we changed them, or swapped bits around. But just that instant spark on a crude recording device is just a really exciting thing for me and a great feeling when you're actually in there.

Full Metal Jackie: Richie, what surprised you the most about the way this band goes about writing and recording music?

Richie: Right from the beginning, the thing that surprised me was that, after a 40-year career, they're still listening to the new guy, if you know what I mean. Everyone listens to everyone. It could be a situation, in some circumstances, where it's a bit of a dictatorship — there's one or two guys that call the shots: "This is what we're doing. This is how it's gonna be" — but from day one, from the early rehearsals, before rehearsals even, when we were going through stage clothes, it was, like, "What input do you have into your stage clothes? What design do you want it to be?" In rehearsals, it's, "How can we change the songs? How can we interpret, you know, put our own stamp on them in a different way to make it exciting? What setlist? What should we leave out or put in?" And even in a live scenario: "How can we make this more exciting and a better package for the fans?" Right up until the studio recording, that kind of mentality just transpired into that environment, and it was very inclusive. And I think when all your opinions and all your ideas are listened to and you're asked for them, and they're heeded and considered an all that sort of stuff, I think it can only benefit the whole. Whatever industry, whether it's the creative industry or whatever job you're doing, if you're part of a group, listen to everyone. It can only benefit the good of the whole. And I think that was a big lesson to learn. It wasn't, "I'm Rob Halford and this is how it's gonna be." Or, "I'm Glenn Tipton. I've been doing this for 40 years, so this is how this riff is gonna be." It's, like, "What do you think?" And that's a big lesson I learned and it was a great thing to take from that experience into the future.

Full Metal Jackie: Richie, you had talked earlier about how sometimes when you're in the studio just sort of roling tape, and I've noticed on Instagram you are pretty good about tracking what's been going on out there, and I have to imagine you have some really good Rob stories from your time.

Richie: Absolutely. The great thing is, I'm involved in the whole promotion for the upcoming "Redeemer Of Souls" record. Because I was involved in the writing and the creative side of the record, I'm now out with Glenn and Rob promoting it. So a lot of the time they're talking about stories from before that I haven't heard. So, for me, it's like an exclusive interview session with two of my heroes. You know what I mean?! So I've got some great stories, just listening to them and obviously being with them for the last few years. They're great guys. They're just characters. They're normal people. But in other ways, they're gods. And they're rightly where they are in the scheme of things. But it's just great to see they are who they are because of who they are deep down, and that's just like me and you and everyone else on the planet, really — just normal people with good values and great creative minds.

Full Metal Jackie: The band recently announced a U.S. tour for the fall. Richie, it's been two years since the final date of the "Epitaph" tour. What have you missed most since then about being onstage and playing these classic songs?

Richie: Well, I think I speak for everyone when I say we do it for the live scenario. PRIEST has always been a live band. We love getting out there as individuals playing and as a group playing. And especially, from my point of view, playing these classic songs is just a dream come true. So I miss the traveling and seeing different countries around the world and meeting different people from different walks of life in different countries, and all that stuff. But, obviously, first and foremost, it's getting up every night and putting those… you know, doing justice to those songs the best you can. And now, with the tour coming up in the fall for "Redeemer Of Souls", we can't wait to get out there again and put these new songs out there to the metal fraternity. And hopefully in 20, 30 years, they'll still be out there, the songs will still be as big as "You've Got Another Thing Comin'" or anything like that. So when we write these songs… When these songs take on their shape in the studio, and again, they might still be the skeleton of the song, but they're instantly recognizable as, "Oh my god, we've gotta play these songs live. We can't wait to play 'March Of The Damned' or 'Halls Of Valhalla' or 'Sword Of Damocles'." PRIEST is a live band, and when we write these songs, it's just instant that we've gotta play them live, so we're really excited to get out into the U.S. and beyond. I hasten to add, we haven't put the plan together yet, but we will be branching out, obviously, into 2015. So watch this space.