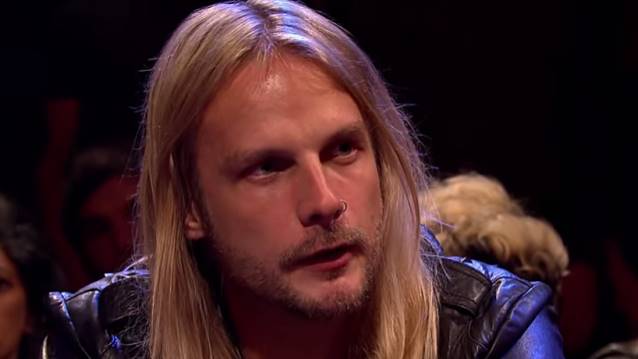 JUDAS PRIEST guitarist Richie Faulkner was interviewed on the latest edition of "The Classic Metal Show", which is heard live on Saturdays from 9 p.m. to 3 a.m. EST at TheClassicMetalShow.com. You can now listen to the chat in the YouTube clip below.

In a recent interview with About.com Heavy Metal, Faulkner stated about what life in JUDAS PRIEST has been like since he joined the band more than three years ago as the replacement for K.K. Downing: "You never quite know what to expect going into any situation. You have an idea or expectations. It's been pretty close.

"I always expected JUDAS PRIEST to be a proper old-school family unit in the sense that they're a band and it's a band of brothers. I always had the expectation that it wasn't a dictatorship, or it wasn't one guy ruling it. It wasn't that sort of situation. That was my expectation. Going into it, it just surpassed my expectations. It's such a family unit. It's really creative. It's that situation where everyone's opinion is valued and asked for. It benefits the whole group. I think that really superseded and surpassed my expectations. Obviously, all the traveling and the seeing different places around the world, you're meeting new people and all that sort of stuff. It's just been everything you would ever dream it to be and then some."

Faulkner also spoke about the songwriting process for the new JUDAS PRIEST album, "Redeemer Of Souls", explaining: "It was stretched out over a couple of years. I think Glenn (Tipton, guitar) and Rob (Halford, vocals) had a couple of ideas kicking around at the start of 2011 before I joined the band. They had about three ideas roughly panned out. Then I came into the band. We embarked on the 'Epitaph' tour. I was writing riffs and ideas and melodies on the road, which I don't think I've ever done before. Even then, ideas were being created. Me, Rob and Glenn then went into the studio in early 2012 for a month and pulled all those ideas in a heavy metal cauldron, put stuff together. Then we went out again to Asia and Europe and finished off the 'Epitaph' tour, came back and did some more writing, and then commenced recording in 2013.

"I think if you condense the writing together, for my part anyway, it was probably two months worth of writing. Actually, we just kept coming out with material, and we got to a point where we said we've got to stop and start putting the stuff down properly because otherwise, we're just going to keep writing forever and we'll never get it done. We got to a point where we said that's enough. We had 19 songs. Let's get them all down. We left one off. It wasn't quite what we wanted it to be. We just put the other 18 songs down and we released those on the 'Redeemer Of Souls' release."

Regarding how "Redeemer Of Souls" has been received by fans and critics alike, Faulkner said: "I'm incredibly proud personally. I think I could speak for everyone in the band. We worked hard at it, proved the conceptions of it, the writing process, the recording. We've been promoting it. We've been involved in the whole machine of the whole press side of things. We're very proud of it. I think it's hard to promote something you're not proud about. We're so proud about it, so we're out there pushing it out into the metal world, into the world in general. It's just been incredible affirmation. We're getting good reviews. It's number six on the Billboard chart. It's great to see these great reviews, and exceeding expectations and all that sort of lovely stuff. It's not what you set out to do. You set out to do what you feel is right. Just to get that affirmation from everyone around the globe, it's just an incredibly proud moment. I couldn't be happier."