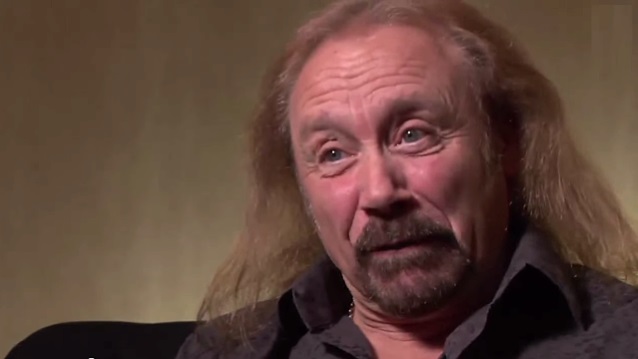 In a brand new interview with Music Feeds, JUDAS PRIEST bassist Ian Hill was asked if he ever gets frustrated with the clichéd metalhead closed-mindedness. "It's always been there though, hasn't it?" he responded. "I think in a way, human beings are partisan, aren't they? Yeah, you follow a band or you follow a football team or rugby team…"

He continued: "The thing is recently, well, over the last 15 years, 20 years even, metal sort of fragmented, didn't it? It went in its different avenues. The older bands like ourselves and [IRON] MAIDEN and [BLACK] SABBATH, we were quite versatile. We'd do things that would make you weep and we'd do things that would make you scared. And everything in between. But these days, you're a speed metal band, you're a goth metal band, you're a grunge band, and that's all they do. Not that there's anything wrong with that — don't get me wrong — but there's no versatility within any one band at the moment. The versatility is there but they're in separate avenues."

Hill added: "I think it'd be great if a band could come along and be unafraid to do the commercial stuff, do the slow stuff, do the ballads. It's all part of metal, at the end of the day. But the only people that are doing it are the older bands, if you don't mind me saying."

Hill also talked about how the members of JUDAS PRIEST have managed to avoid becoming cynical or jaded, even after four decades of recording and touring. He said: "Stagnation. That's something to avoid. With every album and tour, we've always tried to take a little step forward here and there. Bands get a formula and that's all they do. People love 'em for it. We've never done that; we've always tried to push the envelope a little bit. Anything that's come along, any recording technique or gadget, we've always had a go at it. If it sounds good, we'll use it, if it doesn't, we won't. And I think that's the secret, not to stagnate. Try and move forward."