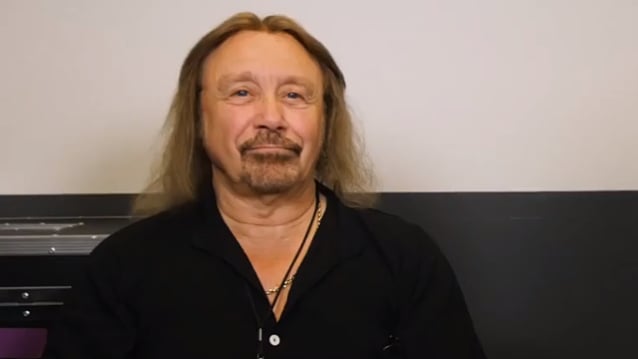 JUDAS PRIEST bassist Ian Hill spoke to Germany's M94.5 radio station about SLAYER's decision to call it quits after completing one last world tour. "SLAYER have had a great run; they really have," he said (see video below). "We love 'em to death; we're great admirers of SLAYER. And we've worked with them over the years — quite a few times, in fact, bumping into each other at festivals. They've been on tour with us as well, on two or three occasions, I believe. They probably decided their time has come. I can't speak for them — I don't know the reasons that they're quitting — but it's obviously a good time for them. So, good luck to 'em — we love 'em to death."

According to Hill, who turned 67 in January, there are no plans for JUDAS PRIEST to retire anytime soon. "We love it, people want us to do it, so why not?" he said. "If ever there comes a time when we can't put a quality show on, we'll start thinking about slowing down again. But that's not happening at the moment."

In 2011, PRIEST embarked on its world run of "Epitaph" shows, at the time billed as a farewell tour. It wasn't long, however, before the members of PRIEST changed their minds, with singer Rob Halford crediting the addition of guitarist Richie Faulkner, who replaced original member K.K. Downing just prior to the "Epitaph" tour, with rejuvenating the band and causing everyone to reconsider.

Hill is the sole remaining original member of PRIEST, which formed in 1969. Halford joined the group in 1973 and guitarist Glenn Tipton signed on in 1974. Rob left PRIEST in the early 1990s to form his own band, then came back to PRIEST in 2003.

PRIEST has just returned to the United States for a co-headlining run with fellow classic heavy rockers DEEP PURPLE.