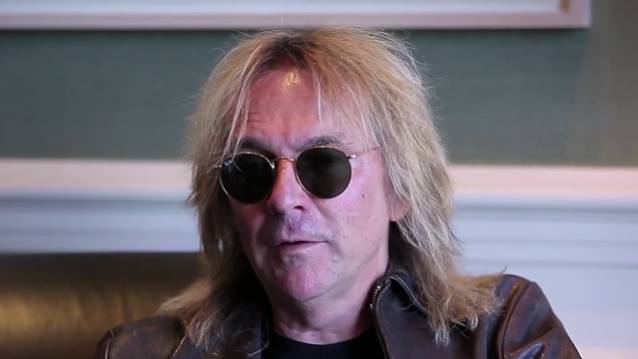 On May 14, Missouri's KSHE 95 Real Rock Radio conducted an interview with JUDAS PRIEST guitarist Glenn Tipton. You can now listen to the chat using the SoundCloud player below.

Asked what hobbies he likes to partake in when he is on the road, Tipton said: "I play a bit of golf. Not too much now. I play tennis. My main love is to fish; I like to fly fish. And I go to Scotland and Ireland and places like that. And I've got some fantastic friends from all over the world I've been fishing with. It's very difficult to do any on tour, to fish; you need a complete day and you've usually gotta get well out of town. But that's what I love; I love the countryside, I love animals and I love to fish."

Asked by Premier Guitar if he was concerned how the new band dynamic with guitarist Richie Faulkner would impact the writing process for "Redeemer Of Souls", Tipton said: "We hadn't worked with Richie before on a writing level, so the first couple of things he presented to us were quite crucial. It was amazing, because everything Richie came up with was just so PRIEST, and it evolved from that point on. For the first time ever, we actually wrote on the road. Richie would go down in the afternoon, set up his recording rig, and kick stuff out. When we had time off, we sat down and started piecing everything together. What we normally do is write our own ideas — including Rob's [Halford] lyrics and vocals — pool them, and before you know it, it takes shape into songs."