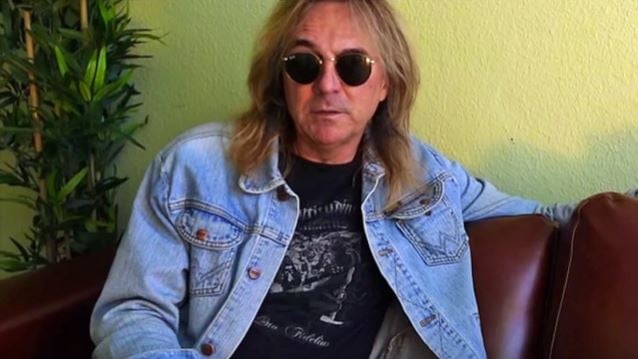 JUDAS PRIEST guitarist Glenn Tipton and bassist Ian Hill were interviewed by the 94.3 The Shark radio station prior to the band's November 5-6 two-night stand at The Paramount in Huntington, New York. You can now watch the chat below. A couple of excerpts follow (transcribed by BLABBERMOUTH.NET).

On JUDAS PRIEST's decision to go back to a classic sound on last year's "Redeemer Of Souls" album following the 2008 double-disc concept album, "Nostradamus":

Tipton: "I think we knew what we've gotta do. 'Nostradamus' was a mammoth task. We had to get one off our chest, you know, a concept album. And our manager suggested Nostradamus. I mean, this guy lived in the 1500s and he's still talked about now. So it was a bit special, really. And it wasn't so much his predictions; it was his life. He not only came up with these predictions, but his wife and daughter died of the plague, he was extradited from France, exiled, he found a new life and a new love, and that, cominbed with his prophecies, just made for a great story. And we actually composed quite a bit of it on keyboards and then transposed it to the guitar to give it a classical feel or even an operatic feel in places. So, having said that, it was a very complex album, something we're very proud of; I don't regret doing that at all. But it wasn't what all our fans wanted from us; we knew that. It was a high-risk project anyway, but… We're very, very proud of it, and it just led us to realize exactly what the fans wanted from PRIEST, and that was 'Redeemer'. And we just wrote in a natural style, and it just emerged as JUDAS PRIEST — raw JUDAS PRIEST — which is what the kids want, you know."

On whether they feel they are long overdue for an induction into the Rock And Roll Hall Of Fame:

Tipton: "I couldn't care less, honestly. And I'll tell you why… It's no disrespect to… I mean, it's not gonna change our life, to start with. And secondly, there's some bands in there that really deserve to be in there, but there's almost as many bands in there that don't deserve to be in there. If it really was the Rock And Roll Hall Of Fame, there's been some serious acts overlooked, you know, and there's been some one-hit wonders put in there. I don't even know who chooses… I mean, is there a body of people up in the sky that sit with God and say, 'Well, that's the band there…' I don't know… But they seem to make some strange choices sometimes. So if I'd got perhaps more respect for their judgment calls and we were selected, yeah, I'd be proud to be in there. But as it stands, I don't think that accolade means anything, really."

Tipton: "I think we've got a meeting scheduled tomorrow to decide what we're gonna do next year, so… We don't really know. We're gonna finish this year, we finish December the 18th, and then there's Christmas to get out of the way. And we have some time off maybe in January. But then we'll sit down and maybe start to write again and see what happens. Which is what we've always done. We're not saying the band is gonna wind it down after this tour. We're not sure; we really aren't sure. I mean, we probably won't go out and tour next year, 'cause we've been out for eighteen months, or we will have done by the end of the year. But I've got a feeling we've got another album in us, and we'll take it from there. We love our time on the stage with the fans, and it would be very hard for us to give up. But there will be a point when we've gotta hang the hat up, and I'd rather hang my hat up than have somebody else hang it up."