According to Law360.com, JUDAS PRIEST lead singer Rob Halford, other PRIEST members, and the band's management team have reached a settlement with Rob's longtime manager John Baxter in a breach-of-contract suit.

U.S. District Judge Gonzalo P. Curiel granted the parties' joint motion for dismissal on Thursday after they said they'd reached a settlement. The terms of the settlement were not disclosed.

Halford, his PRIEST bandmates and the group management team were sued by Baxter to the tune of around $50 million. Rolling Stone reported that Baxter's suit, which can be found as a PDF document at this location, alleged "fraud, breach of contract, and intentional interference with contractual relations." Shortly after Halford fired Baxter in August 2012, Baxter claimed that he realized that the PRIEST frontman owed him millions due to "contract breaches, including failure to pay commissions, salary and expenses dating back to 1992." He said that Halford misled him by saying that he was unable to pay Baxter the monies owed him, but promised to do so when he had the money at hand.

Baxter was fired on August 9, 2012 by a letter from a U.K. law firm stating, in part, "It has become clear over recent weeks that the relationships between our parties has run its course and that you are not acting in our clients' best interests. . . (Your actions have) placed an intolerable strain upon our clients' ability to maintain constructive and professional relations with the remaining members of JUDAS PRIEST and their representatives at this crucial time."

Baxter's lawyer Barry K. Rothman told Rolling Stone: "It was wrongful termination because there's no basis to have terminated. They have their own agenda. Baxter has been managing (Halford) for decades. JUDAS PRIEST was coming to an end and the JUDAS PRIEST people wanted to engage Halford in his solo endeavor and to continue to have a relationship with him which was not possible with Baxter in the middle. There's a whole reason why this all of the sudden abruptly came to an end." 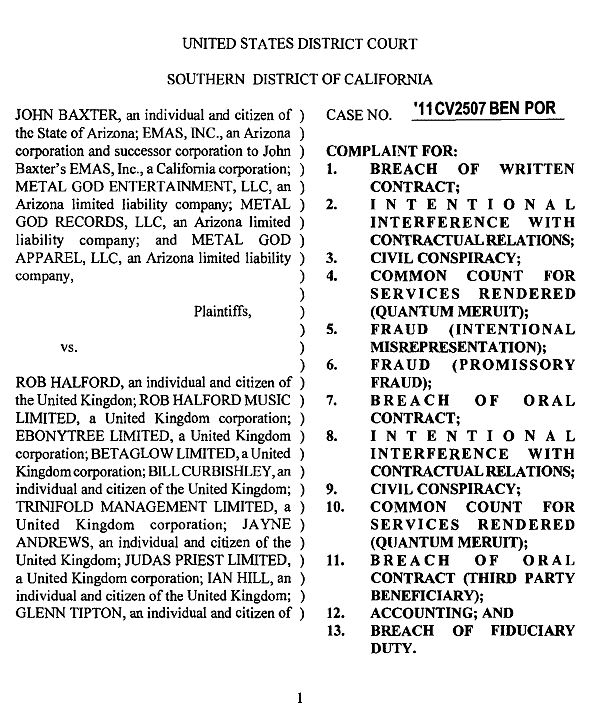