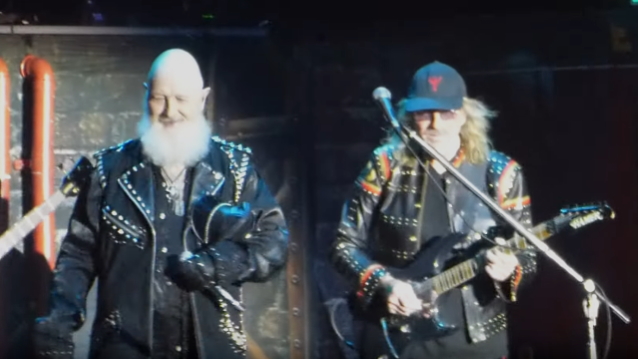 Tipton was diagnosed with Parkinson's seven years ago — after being stricken by the condition at least half a decade earlier — but announced in early 2018 he was going to sit out touring activities in support of JUDAS PRIEST's latest studio album, "Firepower". He was replaced by "Firepower" album producer Andy Sneap, who is also known for his work in NWOBHM revivalists HELL and cult thrash outfit SABBAT.

As he has done a number of other times over the course of the last three and a half years, Tipton joined PRIEST onstage on Bloodstock for the encore, performing "Metal Gods", "Breaking The Law" and "Living After Midnight".

PRIEST singer Rob Halford recently told Metal Pilgrim that Glenn is "still actively involved with JUDAS PRIEST, a hundred percent. Andy is still standing in that spot for Glenn with Glenn's blessing… And my gratitude to Andy. It couldn't have happened in a better way, if you wanna try and make something good out of it. It was a really important day when Glenn said, 'I think it's probably best if I step to the side and maybe we should let Andy come in.' That was just a really beautiful act of selflessness. That's Glenn treasuring PRIEST and PRIEST's reputation, particularly in live concert more than anything else. So bless Glenn for that. And as a result, Andy stepped in and did amazing work on the 'Firepower' tour, and we're looking forward to doing the same thing with him on this 50th-anniversary [tour]. And don't discount the fact that Glenn can show up. He plays the guitar differently, but there's no reason why Glenn can't show up and do some work. I mean, I've said to Glenn, 'Just walk out on stage and do that to everybody [flashes devil horns], and the people will just go fucking crazy, 'cause you are loved so much.' But I've got a feeling that Glenn's gonna be making the occasional appearance on this 50th-anniversary [tour]."

This past June, JUDAS PRIEST announced the rescheduled dates for the North American leg of its 50th-anniversary tour. Produced by Live Nation, the "50 Heavy Metal Years" trek will feature SABATON as openers. It will kick off on September 8 in Reading, Pennsylvania and run through October before concluding on November 5 in Hamilton, Ontario.