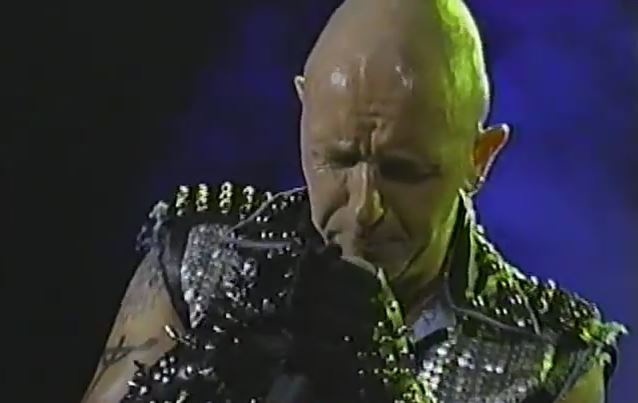 Professionally filmed video footage of JUDAS PRIEST's entire July 12, 1991 performance at Irvine Meadows in Irvine, California during the "Operation Rock & Roll Tour" with ALICE COOPER has been uploaded to YouTube (by YouTube user "Pumpkin Priest") and can now be seen below.

JUDAS PRIEST's setlist for the concert was as follows:

"Operation Rock & Roll" was a metal package that was assembled in honor of the troops fighting in "Operation Desert Storm" in the Middle East. Supporting PRIEST and COOPER on the trek were MOTÖRHEAD, METAL CHURCH and DANGEROUS TOYS.

JUDAS PRIEST singer Rob Halford stated at the time about the band's setlist for the tour in support of PRIEST's "Painkiller" album: "Yeah, we play 'All Guns Blazing', 'Painkiller', 'Night Crawler' and 'A Touch of Evil'. But, you know, when you're playing just under two hours, and you've got 14 albums to choose from, like 150 songs, where do we begin? What are we trying to do? So, we're trying to play songs that we know are the classic cuts. If you play something from 'Sad Wings Of Destiny', people usually want 'Victim Of Changes' or 'The Ripper', which we do. Or from 'Stained Class', we play the ballad 'Beyond The Realms Of Death', or from 'Defenders Of The Faith', 'The Sentinel'. We tried to make a set that had a flow, that had a lot of energy, that really didn't drop too much, apart from 'Beyond The Realms Of Death', where we take a little bit of a rest and then bring it back up again. We're just trying to give something from everything that we've done. But even so, we missed out the 'Turbo' and 'Ram It Down' albums on this tour."

JUDAS PRIEST is currently working on a new studio album, tentatively due next year.

The band's last CD, "Redeemer Of Souls", was released in July 2014. The follow-up to 2008's double-disc concept album "Nostradamus" was billed as a return to JUDAS PRIEST's heavy-metal roots.