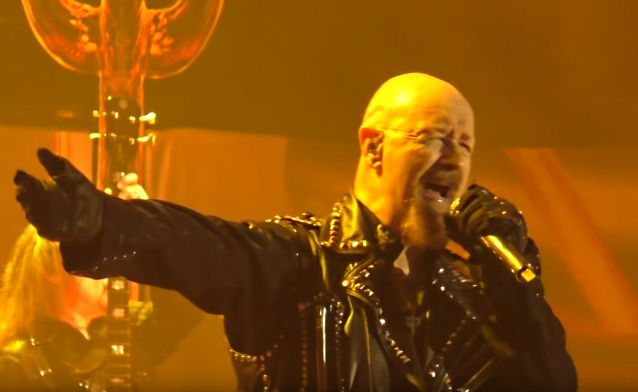 JUDAS PRIEST performed the song "Killing Machine" live for the first time since 1978 during last night's (Sunday, January 27) concert at Zénith de Paris in Paris, France. Fan-filmed video footage can be seen below.

"Killing Machine" is the title track of JUDAS PRIEST's fifth studio album, which was retitled "Hell Bent for Leather" for its U.S. release. It was the band's last studio album to feature drummer Les Binks.

Original JUDAS PRIEST guitarist K.K. Downing recently said that "Killing Machine" was the album that set the band up "for the big change that was about to come, helped enormously by the success of the song 'Take On The World', which was exactly what we were about to do. Launching the PRIEST on an international scale was our prerogative," he explained. "And this pre-preparation album for the timely 'British Steel' played a very crucial part in what was to be the unique consolidation of JUDAS PRIEST and heavy metal."

Bassist Ian Hill is the sole remaining original member of PRIEST, which formed in 1969. Singer Rob Halford joined the group in 1973 and guitarist Glenn Tipton signed on in 1974. Rob left PRIEST in the early 1990s to form his own band, then came back to PRIEST in 2003.

The band will return to the United States in May for a run with fellow classic heavy rockers URIAH HEEP.