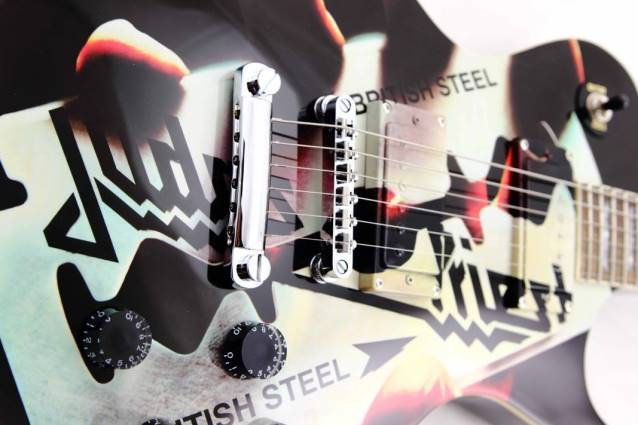 With the 1980 release of "British Steel", British heavy metal legends JUDAS PRIEST took what they had accomplished during the production of "Killing Machine" and doubled down, harnessing their propulsive rhythmic attack and honing their songwriting prowess to near-surgical precision. The album quickly went platinum and eviscerated charts on both sides of the Atlantic, propelling the band to new heights. The first track on the U.S. release left no doubt of their malice and intent, and the immortal riff and rebellious message of "Breaking The Law" still resonates with audiences more than thirty years later. For many fans, the thundering drums and cutting twin guitar assault on this track epitomizes their early sound. Other standout hits from the album include "United" and, of course, the smash anthem "Living After Midnight".

ASG and JUDAS PRIEST have worked together to create the guitar that perfectly represents this iconic album, and the results are stunning. Here's the catch: Only 30 hand-numbered "British Steel" models will ever be produced, each finished by master craftsmen in ASG's Fullerton shop and shipped with a certificate of authenticity. Rosław Szaybo's distinctive razorblade-in-hand cover art bursts off the hand-carved mahogany top, complementing the single cutaway guitar's solid mahogany body, rosewood fingerboard, Mother-of-Pearl trapezoid inlays, Gravedigger headstock, custom ASG Arsenal pickups and chrome ASG headstock emblem. This one-of-a-kind axe is bound throughout and is perfect for any metal fan whether it will be displayed on the wall or shredded on the stage. Only a limited amount of these sharp, custom JUDAS PRIEST guitars by ASG will ever be made, and they're sure to sell out fast.

Pre-sale begins on June 17 at this location.

"British Steel" was originally released in April 1980 and was the band's first platinum Top 40 album in the United States and their first Top 10 studio album in the United Kingdom. Columbia/Legacy re-released this seminal album May 11, 2010. There is a "British Steel" 30th-anniversary standard edition available, as well as a "British Steel" 30th-anniversary deluxe edition box set, available only through JudasPriest.com. The standard edition features a CD of the original nine-song album, plus two bonus tracks, as well as a DVD featuring a "Making of British Steel" interview, as well as full concert footage of the 16-song set from the 2009 "British Steel" tour, filmed live at the Seminole Hard Rock Arena, Hollywood, Florida. The deluxe edition features all this, plus a CD of the live recording from the Seminole Hard Rock Arena concert.