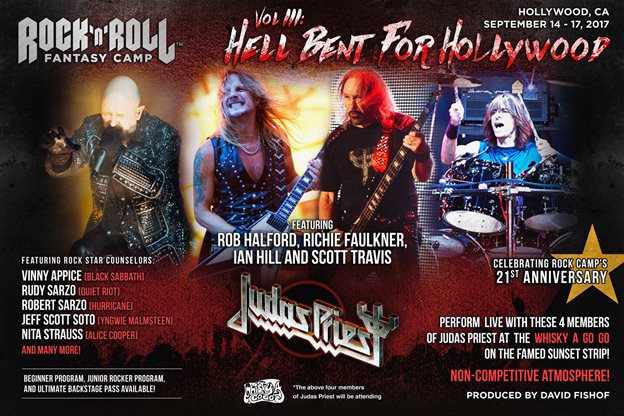 Fresh out of the recording studio and before they hit the road for their world tour, this hard and heavy camp features four members of JUDAS PRIEST — including vocalist Rob Halford, bassist Ian Hill, guitarist Richie Faulkner and drummer Scott Travis. Back to Rock 'N' Roll Fantasy Camp for their third time, this is a not-to-be missed experience!

Over the course of four metal-filled days, campers will be placed into bands led by rock star counselors including Rudy Sarzo (QUIET RIOT, WHITESNAKE), Vinny Appice (DIO, BLACK SABBATH) and many more. Musicians will hone their stage presence, learn to play some of metal music’s greatest songs, get tips on playing as a band and hear stories of life on the road from their rock star counselors. Attendees will also attend master classes and jams rooms with these renowned musicians and then perform live with their band and the members of JUDAS PRIEST in front of a packed house at the infamous Whisky A Go Go on the Sunset Strip.

Also available is The Ultimate Backstage Pass fan package-for the non-musician man or woman who always wanted to come to Rock 'N' Roll Fantasy Camp! Attendees will participate in the question-and-answer sessions and watch the amazing jams and performances with JUDAS PRIEST along with the incredible rock star counselors. Attend master classes; attend the opening night party and all-star counselor jam as well as the live performances at Lucky Strike and the Whisky A Go Go on the legendary Sunset Strip plus much more!

The four-day camp is on sale now at at www.rockcamp.com.