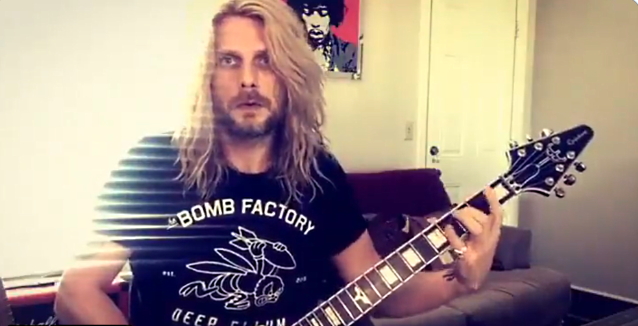 JUDAS PRIEST guitarist Richie Faulkner has invited his fans to contribute any musical ideas to a riff he has posted online for download.

Earlier today (Sunday, March 29), he tweeted out a video of him playing the riff and he included the following message: "So as promised, here's another riff for you 'orrible lot! It's another original idea called Virus 19 that I want you maniacs to do your own thing with. Whether it's a guitar part, a solo, a bass line, drum part or vocal... Last time we even had maniacs making things and doing dances so however this inspires you, feel free to express it! Post your ideas on twitter, tag me and include the hashtag #LockdownRockdown and I'll retweet ya. I'll repost my favourite 10 next week. I'm in e standard Tuning in the F sharp position and it's 100 bpm. I slow the riff down at the end so you maniacs can see and hear more clearly what I'm doing. If you want to download the original file to open in your own software, click the link in my bio. Or go to my website richiefaulkner.com under the menu, falcon riffs. There's also a version with no drums for all you tub thumpers out there! Can't wait to see what you come up with RHRF DOTF #judaspriest #faulkyeah #eavyfaulkinmetal #rockersathome @epiphone @gibsonguitar @gibsoncustom @floydroseofficial @emgpickups"

JUDAS PRIEST will celebrate its 50th anniversary this year with a world tour coming to the U.S. in the fall. Support on the "50 Heavy Metal Years Tour" will come from SABATON.