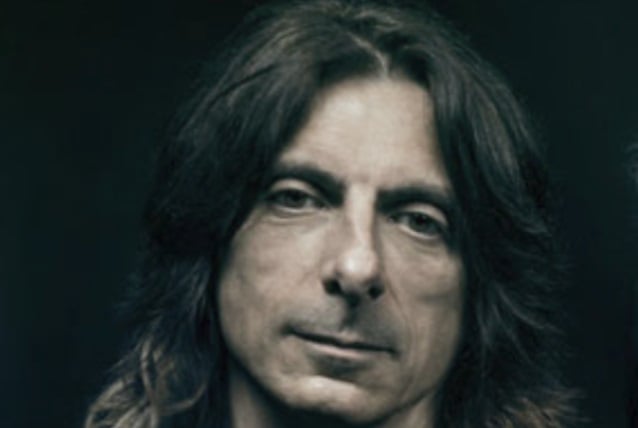 On the latest episode of the "Talking Metal" podcast, Mark Strigl conducted an interview with JUDAS PRIEST drummer Scott Travis. You can now listen to the chat using the Spreaker widget below. A couple of excerpts follow (transcribed by BLABBERMOUTH.NET).

On whether it was a conscious effort to revisit some of JUDAS PRIEST's musical past on the band's new album, "Firepower", or if it came about organically and naturally:

Scott: "I would say it's a little bit of both. Obviously, you'd have to ask that of Richie [Faulkner, guitar] and Rob [Halford, vocals] and Glenn [Tipton, guitar] as far as, did they intentionally write some guitar parts like that? But keep in mind Richie certainly wasn't part of those old records and neither was I, so I don't know if it was a conscious effort, really, on their writing behalf. But from recording and then, obviously, having [producers] Andy Sneap and Tom Allom [involved]… Now Tom Allom was part of the old PRIEST heritage and the PRIEST sound, so to speak, and so he was able to, I think, incorporate and bring some of that old style back. And then Andy also, even though he is what I would call a modern-day producer, he's a big PRIEST fan and he lived on the lineage and just understood the PRIEST world and the heritage of PRIEST, so he was a big fan of the older records and the older sound, so it definitely was a conscious effort on their parts, as well as ours in the performing aspect of it. I mean, even some of the drum stuff I did, I wanted to borrow a little bit of [former JUDAS PRIEST drummer] Les Binks, some of his influence, which I'm a big fan of his anyway from way back in the day. So, yeah, it was conscious, but I don't know if it was written in there like that. Maybe, hopefully it just came out that way, like you said, organically, which was cool that you were able to recognize that."

On his favorite songs on "Firepower":

Scott: "It's interesting you should ask that, 'cause Rob and I were doing an interview earlier today and I made the point that I've moved around a bit on my favorites on this record. Meaning that when I first heard some of the early demos, you have favorites and you like certain hooks or verses or choruses or whatever, and then, as a drummer, I'm in the studio playing the songs, and then again, there may be some different songs. Like, 'Wow! I really love this groove,' or, 'I love playing this, slamming through this with Richie and playing the double-bass part.' And then, full circle, you hear quote-unquote the finished product, after more layers of guitars and vocals have been put on, it's been mixed and produced a little bit, and then, obviously, me, I'm listening to the finished product and then I have new favorites at that point. So, to answer your question, after that long-winded intro, I really like 'Rising From Ruins'. If you put a gun to my head and said, 'What's you favorite?' that would be on there. 'Lone Wolf'… 'Evil Never Dies' is just a cool, simple straight-ahead rock PRIEST tune. 'Never The Heroes', I think, is a great, meaningful song in the sense just lyrically, even though I had nothing to do with the lyrics, but it's a great song [with] a great hook. The record does have a lot of ebbs and flows and, hopefully, it has some movement to it where the first song doesn't like the fifth song sounds like the eighth song. Hopefully there's some different sounds and just vibes that people are gonna get when they listen to it."

On whether he would agree that the production on "Firepower" is bigger and warmer than that on 2014's "Redeemer Of Souls":

Scott: "Well, obviously, we have two different producers on this record that we didn't have on 'Redeemer', so anytime you change producers, you're automatically gonna get a different sound. And that's usually what bands are looking for — that's why you hire different producers. We did record in a much more organic way than I'd certainly done since 'Painkiller'; I have to say that. So, again, hopefully that translates and comes through on the recording that you and the fans will be able to hear and appreciate and hopefully like. And, like I said, Andy is great and he knows how to get great modern sounds — drums, guitars and yada yada. He's a guitar player himself, so that's why the guitars are so goddamn loud, but that's just me. [Laughs] I'm kidding. But anyways… So, yeah, the proof is in the pudding. You have new producers, you're gonna have a new sound."

"Firepower" will be released on March 9 via Epic. The cover artwork for the disc was created by the Chilean/Italian digital artist and photographer Claudio Bergamin.

Listen to "TM 719 Scott Travis and Jim Bachi" on Spreaker.