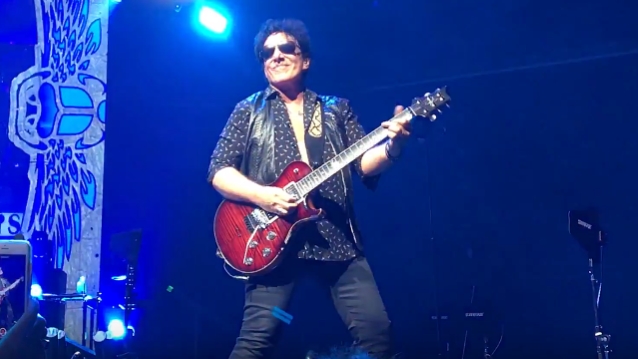 JOURNEY guitarist Neal Schon told Kristie Kemper of the QFM96 radio station in a new interview that he is thrilled to see his former bandmate, Steve Perry, returning to music with "Traces", the singer's first solo album in 24 years.

"I've always been really clear about how I feel about Steve, and he has also in different ways — we just don't talk on the phone all the time," he said (hear audio below). "I'm hoping to meet up for the cup of coffee that he talked about. But I feel like we're in a good place. And after seeing his album cover, which is very trippy — I had to look at it for a couple of days, 'cause there's so many hidden messages; there's definite messages there that mean something. I get it, and after I looked it, I was, like, 'Wow! This is really deep.' So I feel by looking at his album cover and listening to him, I'm just really happy to hear his voice again, to tell you the truth."

Schon went on to say that he and Steve "have always loved one another" and "have always been brothers." Calling Perry "a great guy," the guitarist added: "We all go through shit. We're grown men now, and it's time — like I said a long time ago — it's time to brush off the shoulders, man, and get the weight off and let's get on with it."

As for a possible musical collaboration with his onetime bandmate, Schon said: "I do feel that where I'm at musically, and where he's at musically, that if we got together, it would be stupendous. I don't really know what it would sound like, but I have a feeling that it would just be something brand new."

Perry seemingly ruled out his return to JOURNEY during a recent interview, telling 106.7 Lite FM: "I think that we've gone on our separate ways and we're doing great. Arnel [Pineda] is a great singer and he's been in the band for 10 years, but yeah, I don't think that's where I'm at right now. It took forever for me to find the passion for music again because I felt it was kind of damaged. I thought I would never feel that love again for music, so I had to walk. Now that I've found that again — I have so many other songs ready to be recorded."

"Traces" will be released on October 5 via Fantasy Records (a division of Concord Records/UMG). The disc marks Perry's first solo album since 1994's "For The Love Of Strange Medicine".

JOURNEY's 58-city tour with DEF LEPPAD kicked off on May 21 in Hartford, Connecticut and will run through October 7 in Los Angeles.