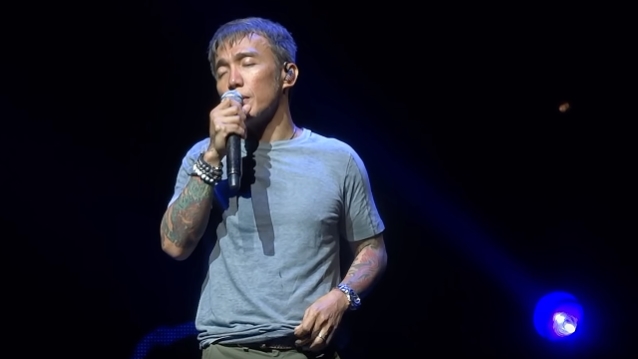 JOURNEY's Arnel Pineda told the Arizona Republic that he was thrilled to meet the band's former singer, Steve Perry, at the group's Rock And Roll Hall Of Fame induction in April 2017.

"Like I claim on my [Instagram] post, I waited 35 years for that," Pineda said. "And, of course, it was one of the most momentous days of my life. It's like meeting the pope, you know? He's one of my heroes when it comes to music — one of the few singers that I have adored all these years, along with Robert Plant and Ann Wilson."

Asked what he and Perry talked about that day, Pineda laughed and said: "Oh, just some random things, you know. We were just talking about the gig — How is it? How do I feel? And he joked to me, saying, 'Are the boys treating you nice? If not, I'm gonna call them and straighten them out,' you know?"

"For the record, I never really wanted to be there because I respect Mr. Steve Perry so much and I think that Rock And Roll Hall Of Fame induction, that's for them, you know?" Arnel said. "It's for the band and not for me. I was really adamant about not being there.

Earlier this year, Perry told SiriusXM that he didn't perform with JOURNEY at the Rock Hall ceremony because he is "not in the band. I haven't been in the band for quite some time," he explained. "Arnel's been in the band for almost 10 years, I think. He's a sweet kid — he's a wonderful kid. He sings his heart out every night. It's his gig."

According to Deadline, Arnel's life story will be the subject of a new movie, to be helmed by "Crazy Rich Asians" director Jon M. Chu.