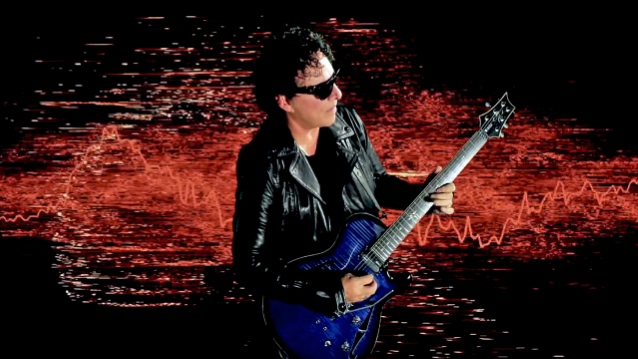 JOURNEY guitarist Neal Schon was recently interviewed by the St. Louis, Missouri classic rock radio station KSHE 95. The full conversation can be streamed below. A few excerpts follow (as transcribed by BLABBERMOUTH.NET).

On whether he ever expected JOURNEY to once again play stadiums:

Neal: "Good music is great music, and I think it's timeless. Things come around, they go around. It's sort of like, every ten years, it feels to me, like it takes a full circle. The timing just seems right again. We've been out there for two decades kicking it pretty hard, and keeping our fans happy.

"I never gave up hope. We kind of defied death a few times [laughs], and it's perseverance. You push forward, and try not to pay attention to the negative aspects that people like to throw around. People like to create controversy. They like to create drama — 'How are you going to do it without this? How are you going to without that?' I prefer just to not listen to any of that and stay within my convictions of where I want to go and what I want to accomplish. If you do that, you always succeed eventually."

Neal: "I started playing guitar when I was 10. What really caught my ear when I first started playing was THE BEATLES. I liked the jangle – I liked that jangly guitar. Then shortly after that, 'Are You Experienced?' came out and I heard [Jimi] Hendrix on the radio, and I was like, 'What is that? I want to know about that.' And then CREAM — I loved [Eric] Clapton. I was listening to a lot of blues back then, so I loved all the Muddy Waters stuff, Howlin' Wolf, Michael Bloomfield, ELECTRIC FLAG, Albert King – who I ended up playing with for many years – and B.B. King. I have a deep-rooted blues background but overall love for all great guitar players, and any kind of great music."

Neal: "Carlos and I remain very, very tight. We're closer now than we ever were back then when I first joined SANTANA. It was a blast when we did the 'Santana IV' record just a couple of years ago. We have great chemistry together because we don't play exactly alike, but our styles fit together very well. I was a lot more of a fiery, speedy in those days — not considered speedy anymore in these days; people are playing so many fast notes and using both hands and doing, like, the eight-finger taps and all this stuff. I kind of refuse to do that, because it's just, wow — how many notes can you play in a bar? I'm kind of old-school like that. I like the blues concept where one note means more, you know? But Carlos and I have always had tremendous respect for one another. It remains like that. We're better friends now than we've ever been."

Neal: "I don't perceive it being any kind of giant production with flames and, like, really outside stuff. Give us a nice, large, flat stage with a huge PA, lots of great lighting, and long, long catwalk."

On whether the two bands will "jam":

Neal: "I think ultimately, that would be very cool. I don't think it will happen in every city, but I could see that happening, definitely. From night to night, we're going to be flip-flopping, so it'd be interesting to do something like that."

JOURNEY's 58-city co-headlining tour with DEF LEPPARD will kick off in Hartford, Connecticut on May 21 and will wrap in Los Angeles, California on October 6. Tickets for most dates go on sale to the general public beginning Saturday, February 3 at 10 a.m. local time at Ticketmaster.com.