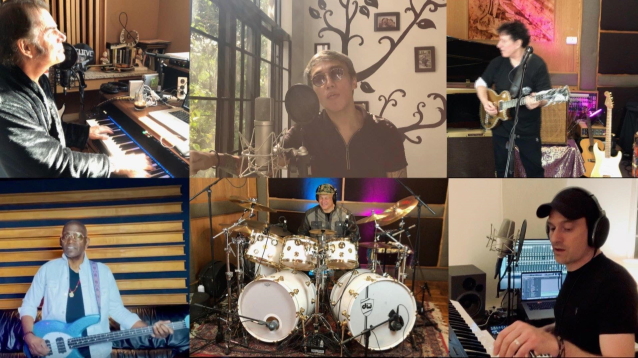 JOURNEY has announced the addition of bassist Randy Jackson and drummer Narada Michael Walden to the group's ranks.

"JOURNEY is an ever-changing unstoppable force," Schon added. "This is a completely new chapter for us and can't wait to get to it!"

The new JOURNEY lineup performed a socially distanced version of "Don't Stop Believin'" for UNICEF USA's virtual event "UNICEF We Won't Stop", which aired Saturday night (May 23) on MSNBC. Also appearing with the band was keyboardist and vocalist Jason Derlatka.

Jackson is no stranger to JOURNEY, having previously played with the band from 1985 to 1987 and appeared on 1986's "Raised On Radio" album. Walden is a Grammy-winning musician and producer who has previously worked with the likes of Whitney Houston, Mariah Carey and Aretha Franklin. He was honored with Grammy Awards for "Producer Of The Year" in 1987, "Album Of The Year" for the movie soundtrack "The Bodyguard" and the "R&B Song Of The Year" for Franklin's "Freeway Of Love". He has also worked with Jeff Beck, THE TEMPTATIONS, Regina Belle, Lionel Richie and Elton John, among many others.

On March 3, Schon and JOURNEY keyboardist Jonathan Cain filed a lawsuit against bassist Ross Valory and drummer Steve Smith, who have been members of JOURNEY on and off since the band formed in 1973, claiming the two attempted a "coup" in order to gain control of the JOURNEY trademark. The suit, which seeks more than $10 million in damages, accuses Smith and Valory of holding an "improper" shareholder and board of directors meetings in February during which they ousted Cain and Schon from leadership posts at Nightmare Productions under the "incorrect" assumption that the company held the rights to the JOURNEY name. A month later, Valory countersued Schon and Cain, accusing them of a breach of contract and of causing him emotional distress. He's seeking "past and future compensatory damages." He's also asking a judge to determine who has rights to the JOURNEY band name.

"The JOURNEY name is controlled by Neal Schon and Jonathan Cain," a lawyer for Cain and Schon told Rolling Stone in March. "And for very good cause, they don't want to perform with Smith or Valory anymore, they don't want to have anything to do with them, and that's their right. They're going to go on with JOURNEY, continue with the great success of the past and these two guys are going to get replaced."

Earlier this month, JOURNEY canceled its previously announced 2020 North American tour due to the coronavirus pandemic that is sweeping the globe. The 60-date trek with THE PRETENDERS was supposed to kick off May 15 in Ridgefield, Washington.


Ok Friends word is out ! @randyjackson RJ the Big Dawg is our new Bass player again ???


Word is out ! @officialnarada Narada Michael Walden is our new Drummer! Multi talented song writer Producer / Mahavishnu orchestra ???? The J Boyz will have a new Strut ??? thank you for your love and help my LadyM ?