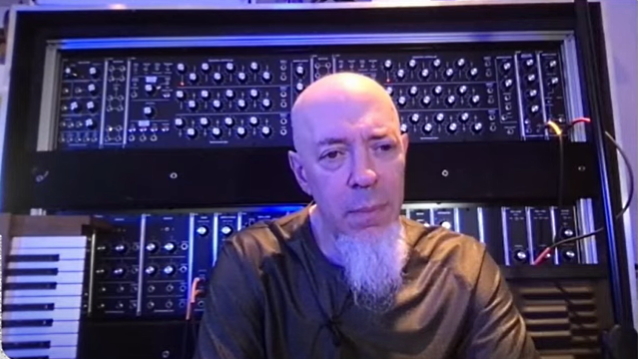 DREAM THEATER keyboardist Jordan Rudess spoke to "Breaking Absolutes" host Peter Orullian about the band's recently recorded follow-up to 2019's "Distance Over Time" album. He said (as transcribed by BLABBERMOUTH.NET): "There's a lot of good stuff on the new record. I'm very, very proud of these keyboard tracks. I'm probably more proud of these keyboard tracks on this album than anything I've ever done with DREAM THEATER — in a big way. And probably the credit is due to Jimmy T [James Meslin] as well, who's our illustrious engineer, who recorded LIQUID TENSION EXPERIMENT, he did the last DREAM THEATER album and who recorded this album. He and I worked very closely in the studio really finding, crafting the sounds. And it was really a great experience."

Last month, DREAM THEATER singer James LaBrie told "Breaking Absolutes" that he and his bandmates "upped the ante" with their new LP. I said to [guitarist] John [Petrucci] when I was finishing the last vocal, I said, 'You know what? We just hit a whole new level.' And I said, 'This is our 15th freaking album, and we've done it again. There's something going on here that I think the fans are just gonna flip out when they hear it.' And he goes, 'I said that to my wife the other night. I was sitting down. I was listening to the album from front to back, and I was freaking out.' And I go, 'Same here. I'm listening to these songs when we're done, and I'm going back to the hotel room and I'm listening to them, and I'm going, 'Holy shit. What the hell is going on here?'' And I think it's very exciting. And even Jordan— he was FaceTiming me, going, 'Holy shit.' He's all amped up. He's, like, 'Is it just me or are you hearing this stuff?' And I'm, like, 'No, man. There's something really cool going on here.' And he's going, 'The fans are gonna freak out.'I go, 'Yeah, they are. They really are.'"

In April, Petrucci told Germany's Thomann that DREAM THEATER had been working on the new album since October. "And I am super excited about it. The record [is] filled with energy and excitement and positivity. I'm excited about it. I can't wait for people to hear that."

DREAM THEATER's new album is tentatively due in the fall.

"Distance Over Time" marked DREAM THEATER's first album for for Sony Music's progressive imprint InsideOut Music. The group spent 25 years recording under various labels in the Warner Music Group system, most recently Roadrunner Records, which released five albums by the band between 2007 and 2016.