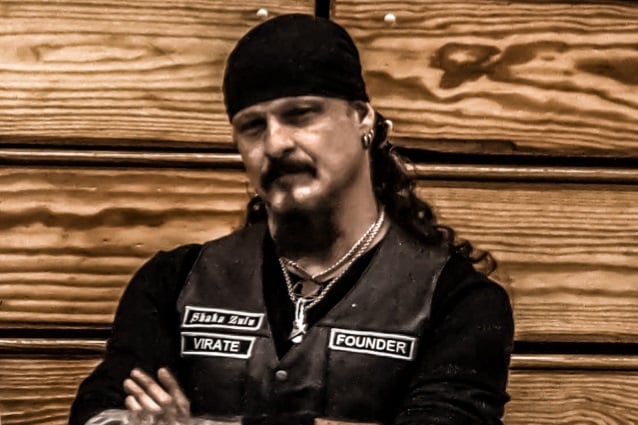 ICED EARTH guitarist Jon Schaffer was recently interviewed by Greece's Rock Overdose. The complete three-part conversation can be heard at this location. A few excerpts follow (as transcribed by BLABBERMOUTH.NET and Rock Overdose):

On whether he stands by his prediction that the group's latest release, "Incorruptible", will eventually be considered a "classic ICED EARTH album":

Jon: "Yeah, I do. What I said was [that] I feel like it's going to be a classic. I'm aware that the fans ultimately decide that, but the fans are very fired up all over the world. My instincts are usually right when it comes to that kind of stuff, and I was feeling it pretty strong very early in the writing process. So far, it's playing out that way. We'll see. You can't decide in four months if it's a classic. It's going to be a few years. A lot of these songs are some of the best that I've written in my career, or co-written in my career."

On the origins of the "Incorruptible" song "Clear The Way":

Jon: "It's kind of been brewing in the back of my mind for many years now — 'One of these days, I want to write a song about the Irish Brigade.' And I still have plenty of ideas like that. They sit in my mind maybe for eight years, 10 years, where I'm thinking, ‘Yes, some day that's going to happen,' and it just happens when the time's right.

"I'm sure it goes back to, at least, when I was in the writing process for 'The Glorious Burden'. I think I probably considered doing one about the Irish Brigade then, but because of the magnitude of 'Gettysburg', I just left it. [For 'Incorruptible',] it just felt right. I didn't want to make it a themed record or a concept record, so I had an opportunity to write about a bunch of different subjects and I just felt like it was a good move to make. It felt right to me. I had recently unpacked this painting called 'Clear The Way' by Don Troiani. It's an amazing piece of art and it was hanging in my house for many, many years, and then it ended up being boxed away in storage. I unpacked it, and it made me kind of reconnect with that energy in a way. It just happened, man. I don't really think too deeply; I just go with it."

On why he thinks his bond with vocalist Stu Block is so strong:

Jon: "It's probably past-life stuff. I don't really know. I mean, Stu and I felt familiar with each other from the moment we met — like, there was some deeper relationship there. Then, after all of the years that we've spent on tour together, and all the shit we've gone through — and not bad shit, amazing shit; we've had a hell of a journey already — the bond just got stronger. That's quite a statement, because if you look at just the 'Dystopia' tour and immediately going into doing 'Plagues Of Babylon' and, in the middle of that, the 'Live In Ancient Kourion' DVD came out, it was a tremendous amount of work, and then we go on another massive world tour for 'Plagues Of Babylon'. Stu's done more shows with ICED EARTH than any — all — of the singers combined. Sometimes in those situations, you can have a relationship that doesn't go well because maybe there's clashes and a personality war, but with Stu. Stu and I just got tighter, so it's a very cool thing."

Jon: "We are going to be re-recording [our older] records over the course of, probably, the next 10 years. We're going to be doing a lot of the ICED EARTH catalog because I don't own the master rights and there's no real income coming from that. If we redo those records, then everybody in the band will be able to get a royalty in the future moving forward. It's going to be a big project and it's going to be a lot of fun to do, to really dig back into those records — especially, like, the first six. That's what we're gonna focus on. I don't know which one we're gonna start with yet. I have a pretty good idea which one, but the guys and I will talk over that in the next few months. Not to take away, because I think those albums are great, but the fact is that it was a bad business deal for ICED EARTH, and for us going forward, we want to be able to have control of our catalog and of our destiny."

"If it takes three or four years for another ICED EARTH record, then so be it. I don't think that it will, but if it does, okay. Going forward, we're not going to be under any pressure to make another ICED EARTH record to the point where we're rushing it in between scheduled tours or something. I'm just not going to do that. It's going to be more, you know, we take our time and make the record that we want to make, and then, we put it out. And if we do that, we're going to end up with albums like 'Incorruptible' all the time, because it's not forced. It's like you're allowing the energy to flow the way it's supposed to and coming up with the goods. That's all about learning from past experiences and just trying to go with the flow and not force something because of a time commitment. And besides, now that we are free [agents], the way that we're going to be doing business as a band going forward is going to be completely different than anything in the past. That, also, gives us a lot of possibilities of dictating the way that our future is done. So, it's a great period for the band right now, actually."

ICED EARTH signed with Century Media Records in 1990 and initially recorded six studio albums for the label over an 11-year period. In 2003, the group signed with SPV/Steamhammer, with whom they released three albums over the next five years. The group then signed a new three-album deal with Century Media in 2010, a contract that was fulfilled in June of 2017 with the release of "Incorruptible".