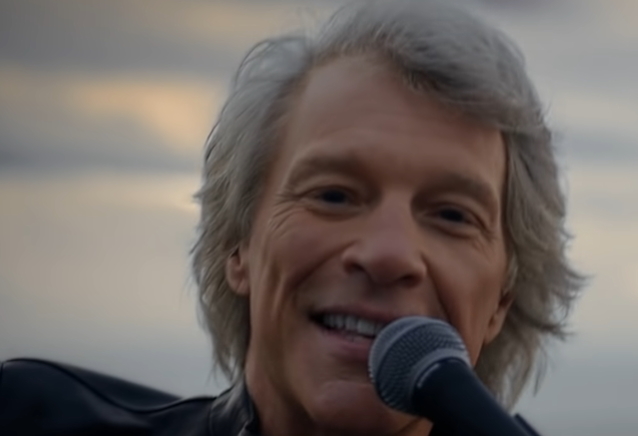 In the latest installment of "Mavericks With Ari Melber", a MSNBC series of interviews with artists, musicians and cultural icons, Rock And Roll Hall Of Famer Jon Bon Jovi opens up about his songwriting, from classics like "Livin' On A Prayer" to new ballads about COVID-19 and the BLM protests; why he runs his band like a CEO; and how he has learned to measure true success.

Speaking about the advice he would give to younger artists looking to break into the music industry, Jon said (see video below): "I got a record deal in such a unique way that I don't know how I was so smart to think of it. But I said, 'Who is the loneliest man in the record business?' And my answer to myself was, 'The DJ.' And so I went and I knocked on the door of a brand new radio station that, fortunately for me, was so new, it didn't have a receptionist. And the DJ [told me to wait] one minute, 'cause he was on the air. He came out on the commercial break, and I told him that I wanted to talk to him. I had these songs, one of which was 'Runaway'. He said, 'Stick around until after I'm off the air. We can talk.' I did. Eventually, that song got on the radio in New York City — no band, no record deal, no manager, no nothing. A 20-year-old kid knocked on the door."

He continued: "Now, looking 37 years later, kids have the Internet, so they have to find their own way to reinvent the wheel. They have to think of something that's as unique so that they stand out. 'Cause there's a lot of other talented kids out on the street, and a lot of other talented songwriters out on the street. In order to differentiate yourself, you've gotta think differently. And so go and be that me from 37 years ago and find your DJ, find your way. It can be done. And do not succumb to fads and fashions, because by the time you get up to speed on whatever is fashionable, the trend has changed. You have to be your own self. That's why you don't see me doing collaborations with rap guys and pop guys and dance bands, because unless you're true to who you are, it's not gonna resonate — it's gonna be a fad, and it's gonna be there for a moment. Move on. It's like candy — it's a sugar high."

BON JOVI's latest album, "2020" was released in October via Island Records. Originally due last May, it was a completed album with a breadth and depth of songwriting, titled for a challenging and pivotal election year. Along with all of America, Jon Bon Jovi found himself unexpectedly experiencing a world-altering coronavirus pandemic, followed quickly by the staggering events of George Floyd's death and the ensuing national movement for racial equality. He knew there was even more to say about 2020. Writing from a home studio, two new songs were born: "American Reckoning" and "Do What You Can" encompass these events and made the album a complete body of work.

On "2020", Jon Bon Jovi delves into socially conscious matters such as soldiers dealing with post-traumatic stress disorder ("Unbroken", featured in the documentary "To Be Of Service"), gun violence ("Lower The Flag"), our shared social experience ("Let It Rain", "Brothers In Arms") and the political climate ("Blood In The Water").