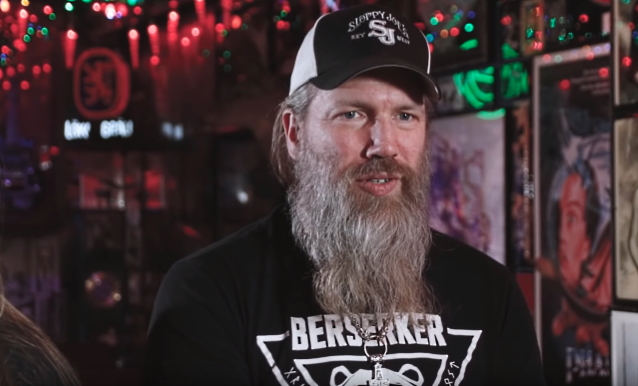 Hegg tweeted: "Do something for your own well being today! Join my wife, Maria, and me for yoga online at 6:30pm CET! As usual she'll be the teacher, and I'll be the guy that shows you that if I can do it, anybody can!"

In a 2018 interview with Nordic Metal, Hegg stated about how he prepares for an AMON AMARTH live show: "Roughly an hour before the set, I start warming up. I have a little yoga routine that I do for the body to open up the back and all that stuff and I do vocal exercises and stuff like that, just to get into the feeling of it."

"The previous album was a concept album, but we didn't want to get into a situation where every album has to be a concept record, so this is different," stated Hegg. "We wanted to step away from that and look at being a little bit more diverse, with the lyrics and everything else. I got ideas from lots of different things, from history stuff and mythological sources. Sometimes you just get something in your head and there doesn't have to be a bigger meaning behind it — sometimes it's just a great metal lyric that fits with a great metal song. And these are fucking great metal songs.

"For me, this is AMON AMARTH 2.0," Hegg continued. "I think what we've done here is give ourselves the space to explore other parts of our musicality and who we are as a band. If you're content with where you're at, what's the point of continuing? We always want to come up with new ideas and find new ways of doing things and to create bigger and better shows and really try to improve every aspect of what the band is. We want to try to keep growing and to do this for as long as we have the possibility to do so, because this is the best fucking job in the world."

Do something for your own well being today! Join my wife, Maria, and me for yoga online at 6:30pm CET! As usual she’ll be the teacher, and I’ll be the guy that shows you that if I can do it, anybody can!


More info in the link below!https://t.co/SXCQvcqYFU