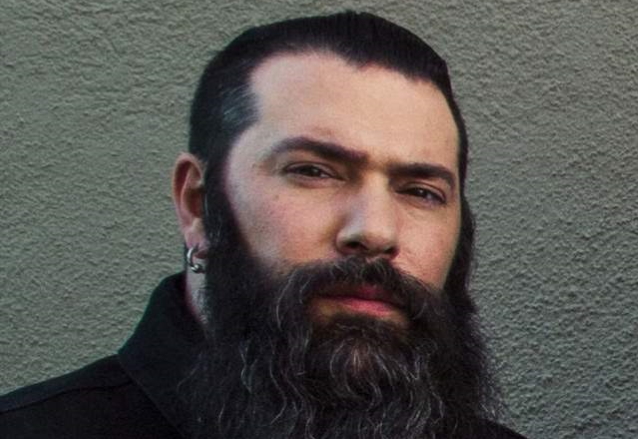 Bassist Johny Chow, who joined STONE SOUR in 2012, told the "Not These Two Fucking Guys" podcast that he was "always a hired gun" in the previous bands that he was in, including CAVALERA CONSPIRACY. "The reason why STONE SOUR is so special to me, man, is because it's been so many years since I haven't been a hired gun," he said. "And that's what you start out doing. You're just jamming in a garage with your buddies — you wanna be a part of it; you wanna play your own bass lines.

"[Being a hired gun is] a double-edged sword, man," he explained. "It's, like, 'Oh, you had a shitty tour? Fuck you — pay me.' 'Oh, your bus broke down, and now we've gotta… Fuck you — pay me.' [As a hired gun] when I leave the house to when I get back in the house, I'm getting paid the whole time. So that's the advantage to being the hired gun — you can have shitty tours [and still get paid your normal salary].

"I love STONE SOUR, 'cause they do everything equal, man — 20% across the board [for each of the] five members," Johny added. "And it's great, 'cause there's no [fighting over], 'Oh, I played this,' or, 'I played that,' and, 'I need my 1.3% more than you.' There's none of that, man. Whether you write a single note or nothing at all or all of 'em, everybody splits everything equal. It's a really great vibe. That's why, I think, we do have such good energy amongst us. We have a good time. We all enjoy our company. We love hanging out with each other. And I think it showed on that last album, too [2017's 'Hydrograd']. That last album was recorded live."

Chow went on to praise "Hydrograd", saying it's one of his proudest musical achievements to date.

"If you were to tell me tomorrow it's all done, I could say, well, at least I got to do an album that I had a massive part of the writing, as well as Roy [Mayorga, drums]," he said. "Everybody did so much writing on this album. And that's what I've been wanting to do. That's why when they offered me to be an equal member, I was so excited, man, because it's, like, 'Oh, my God. I get to actually write my own bass lines. I get to write full songs if I want.'"

According to Johny, one of his musical ideas ended up being the first track STONE SOUR worked on for "Hydrograd".

"When Corey [Taylor, vocals] was out with SLIPKNOT, not on this cycle, but the cycle before, he said, 'Okay, guys. We're kind of starting to wind down. I'm getting a little bit more time on my hands. Start sending me riffs, ideas, songs you might have.' And I had this song that I recorded a long time ago — not even a long time ago, but a few years before that — that I still thought was badass. And I was, like, 'Man, fuck it. I'm gonna throw this at Corey.' I threw it right at him. And within a half an hour, he calls me up and says, 'Chow, what the fuck? Where the hell have you been hiding?' He sent an e-mail out to everybody, and he said, 'Okay, guys. Chow sent me this song. This is the first song I'm gonna be working on. And I've got some awesome ideas already.' And that turned out to be 'Knievel Has Landed'. Not a whole lot of tweaking. I think Christian [Martucci, guitar] tweaked the pre-chorus verse a little bit to bring it up an extra key, to give it a little bit more movement with that. But there wasn't a lot of other things done to it. It pretty much is that song that I wrote years before."

Last month, Corey said that there are no plans for STONE SOUR to work on new music anytime soon.

The SLIPKNOT and STONE SOUR frontman recently completed work on his debut solo album for a tentative September release.

STONE SOUR has been off the road and out of sight since completing the touring cycle for "Hydrograd". Taylor has been working with SLIPKNOT since then, recording and touring behind that group's sixth effort, "We Are Not Your Kind", although all plans are on hold right now due to the coronavirus pandemic. Guitarist Josh Rand has been promoting STONE SOUR's new live album, "Hello, You Bastards: Live In Reno", which came out in December.