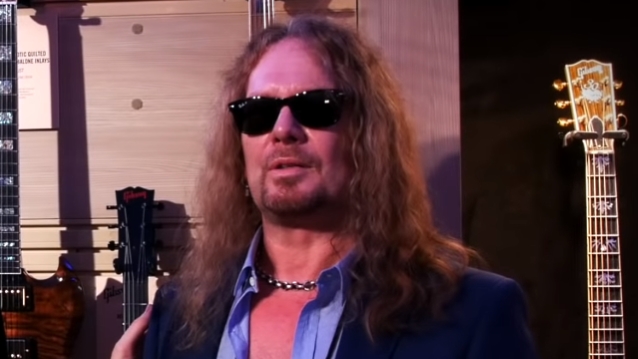 During his first interview in several years, guitarist John Sykes was asked about the persistent rumors of a reunion of the power trio/supergroup BLUE MURDER. The band was by formed by Sykes and featured bassist Tony Franklin and drummer Carmine Appice.

"I'm not sure we're gonna do a reunion," Sykes told Jason McNamara on Thursday (January 24) at this year's NAMM show in Anaheim, California (see video below). "But I've been playing with Tony — recently we've been playing [with] my new drummer Fred Boswell Jr. So we've been jamming out. And when I go and hit the road, which will be early summertime, I'm looking forward to playing some of the old BLUE MURDER stuff. I'm doing stuff from WHITESNAKE, BLUE MURDER, the new stuff off the new album. Just old and new stuff mixed together. So there'll be a bunch of that stuff in there. We've been having a lot of fun playing it."

The as-yet-untitled disc (its previously announced title of "Sy-Ops" has now apparently been scrapped) is expected to include such tracks as "Dawning Of A Brand New Day", "Believe In Yourself", "My Guitar" and "Out Alive".

Franklin recently told Rock Titan that a BLUE MURDER reunion "probably will not happen," in part because of Appice's health issues. "We actually almost came very close to doing it," he said. "We were gonna talk this time last year, and then Carmine, unfortunately, had some big health challenges. We almost lost him, but he's doing fine now — I mean, he's back playing gigs and touring and everything. But he was caught overseas, and that was part of the challenge. And so he no longer wants to travel overseas, into Europe, because they weren't able to help him, and it was touch and go. So, understandably, I think, wisely, he's not gonna travel outside the U.S. He's still got plenty of work that he's doing — he's touring with THE RASCALS, he does his VANILLA FUDGE stuff, his 'Drum Wars' thing. So he's plenty busy. And then also, John wants to do more than just BLUE MURDER. He wants to play some of his amazing catalog — WHITESNAKE, BLUE MURDER, of course. And he has a new album which is coming out this year. And so we have put together a new band, and we shall be making some headway with that pretty soon."

Franklin said that his new band with Sykes does not yet have a name. "It might be just under John's name," he explained. "I don't know."