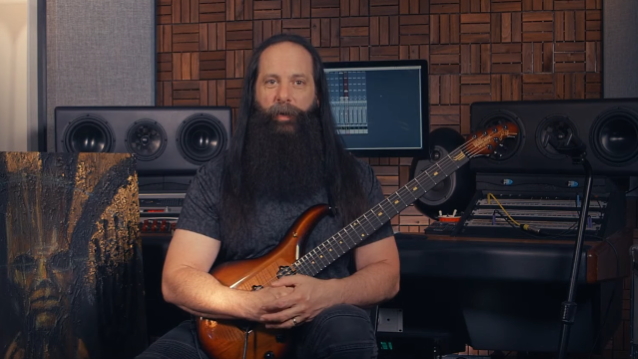 In the nine-minute Guitar World video below, John Petrucci discusses the riffs and writing process behind the song "Invisible Monster" from the new DREAM THEATER album, "A View From The Top Of The World".

"Invisible Monster" clocks in at 6:27 and showcases the musicianship and creativity that has garnered the band fans around the globe. The video for the song was directed by William "Wombat" Felch (MUDVAYNE, HELLYEAH, CROBOT, STATIC-X, NEFARIANT) and follows the story of an artist's internal struggles as the band is showcased performing the track. The piece of art created by Felch in the video now lives inside DTHQ.

Petrucci stated about "Invisible Monster": "It was written after we'd written a bunch of material. A lot of the music was super energetic and upbeat, tempo-wise. [Drummer] Mike [Mangini] suggested we do something a little different though. So, we started working on a more mid-tempo song. The hook, riff, and melody changed so naturally. I equate it to 'Pull Me Under' back in the day where we'd just start playing, something would come out, and we'd be, like, 'Whoa, that's cool.' There's a serendipitous moment where it happens. Lyrically, it's about how anxiety plagues people. It's like there's an invisible monster beating you. You don't see it, but it's haunting you all of the time."

Due on October 22, "A View From The Top Of The World" is DREAM THEATER at its musical finest expanding on the sound they helped create while maintaining the elements that have garnered them devoted fans around the globe. The seven-song album also marks the second studio album with InsideOut Music/Sony Music. The artwork was created by longtime cover collaborator Hugh Syme (RUSH, IRON MAIDEN, STONE SOUR). "A View From The Top Of The World" was produced by Petrucci, engineered and additional production by James "Jimmy T" Meslin and mixed/mastered by Andy Sneap.

"We just love to play our instruments," observed Petrucci. "That never goes away. I love to be creative, write, and exercise that part of my mind. We've been able to do this for a long time, and we don't take it for granted. Whenever we get together, we know we can't disappoint ourselves or our fans, so we manage to try even harder."

"We approach every album like it's our first," added LaBrie. "It's been such a great ride, but we're not going to stop."

Speaking about how the album title came about, Petrucci said: "Honestly, titling records is a funny thing because sometimes it comes really quickly — sometimes it even comes before — and sometimes it's really hard trying to come up with, 'What is the title that's gonna reflect what this album is all about?' This one, it was difficult. There was nothing that was really coming to mind. The things that were were… I don't know. It's hard to be original. Things you used or it just didn't quite do it.

"I remember the discussions we were having [were] that the music was really powerful; it was dark, but it was also positive; there's a lot of energy; there's a lot of spirit," he continued. "So, what would kind of encapsulate that? Eventually, one of the songs on the album is the epic 'A View From The Top Of The World', the title track. I had a list of dozens and dozens and dozens and dozens [of titles]… And then one day I just kind of saw that, and I was, like, 'You know what? That's pretty damn DREAM THEATER-y as a title.'

"Like anything that we do, I just pose it to everybody and say, 'What do you guys think of it?'" John added. "I think the time when you know that it is the title, or it is the decision, whatever it may be, it's when everybody kind of comes back, like, 'Yes. That's so cool.' I remember everyone was, like, 'That's such a positive title. That's cool. Love it. Thumbs up.' Blah blah blah. And you know. Then you're, like, 'Okay, cool.'"