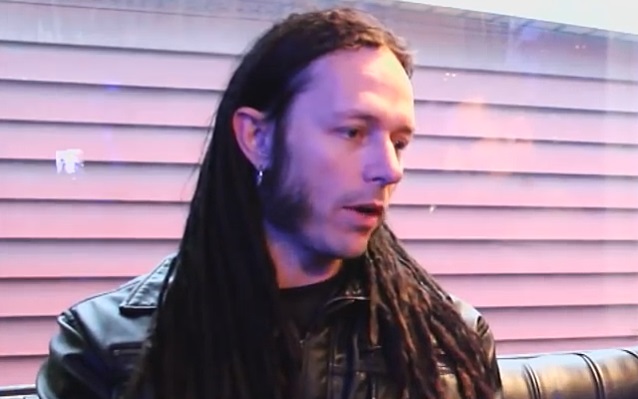 Bassist John Moyer claims that ADRENALINE MOB "has known for weeks" that he would not be joining them on the road for the upcoming tour and says that he is "confused" by the band's assertion that they were "totally shocked" by his announcement that he would sit out the trek.

After Moyer posted a message on his social-media sites saying that he would not be touring with ADRENALINE MOB this fall, the band responded by saying they were "totally shocked by John Moyer's announcement." They added: "We knew he had some other commitments that might have caused him to possibly pull out but we were hoping to have him on board."

"I feel like I need to clear something up. ADRENALINE MOB has known for weeks that I would not be going with them on this run. I asked them to issue a press release saying so but ADRENALINE MOB management said 'no need.' If I wanted to post it on my page, that was fine. That conversation happened over a week ago.

"Once again... I was told by ADRENALINE MOB management to post that I was not going out.

"I'm very confused by the 'shock' of my post. I don't think that management and band were on the same page about my post. Perhaps that was the 'shock' they referred to. Unfortunately, it also reads as if they didn't know for sure if I was going out. This is definitely NOT the case.

"Once again, everyone has known for weeks that I was not going out. In fact I wouldn't be surprised to find out that they've already found my fill-in and have had some rehearsals with him. My post was for my fans who were assuming I was going to be out with ADRENALINE MOB. Out of respect for my fans, I asked ADRENALINE MOB to please let people know my status. And as I said before, ADRENALINE MOB management not only cleared me making that post, but suggested I do it in lieu of a press release.

"I would NEVER tell a band that I wasn't going to go out via Twitter. People that know me know that I pride myself on my professionalism even in less-than-perfect situations.

"I love the band and the guys and it is unfortunate that this turned into such a 'shit show,' as they say.

"As far as moving forward with the band, I was hoping to leave the door open for future tours, but that may not be possible now.

"Thanks for letting me clear that up. Peace!"

Moyer has been standing in for Rudy Sarzo with Geoff Tate's QUEENSRŸCHE whenever Rudy has been unable to make QUEENSRŸCHE dates to his commitments to other projects.

The bassist explained that the reason he is sitting out the ADRENALINE MOB shows "has nothing to do with DISTURBED or Geoff Tate's OPERATION: MINDCRIME." He added: "I'm finishing two production projects with the bands WRETCHED SKY and FAVOR THE FALL. I'm also producing the bands WARRIOR SPIRIT in August, ASCENDING FROM ASHES in September and 1 ECHO 1 in October. I will also be overseeing big plans with my rock school John Moyer's Natural Ear Music School in the fall."

ADRENALINE MOB's second full-length album, "Men Of Honor", sold around 3,600 copies in the United States in its first week of release to land at position No. 99 on The Billboard 200 chart.

"Men Of Honor" was released on February 18 in North America and February 24 internationally via Century Media Records. The CD features 11 new original songs produced by Allen and Orlando.