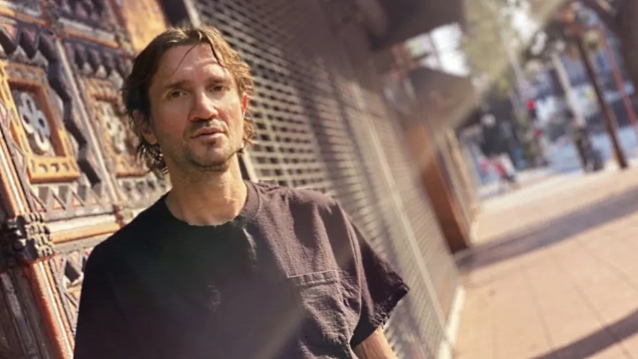 RED HOT CHILI PEPPERS guitarist John Frusciante, who rejoined the band last December, says that the band is continuing to work on new music amid the coronavirus pandemic.

Speaking about what it's like to play with his RHCP bandmates Anthony Kiedis, Flea and Chad Smith once again, Frusciante said: "It's just returning to family. I'm extremely comfortable with those people. It was as if no time had gone by at all when we started playing, pretty much, with a couple of minor exceptions, like how Chad and I gradually got our communication together in a new way. Basically, we're all just as comfortable with each other as we ever were, and it just felt like that right off the bat."

Frusciante has just released a new solo instrumental album, "Maya", via Aaron Funk's Timesig label. The record is dedicated to his cat Maya, who recently passed away, and is inspired by his favorite music: '91 to'96 U.K. breakbeat hardcore and jungle.

Asked whether his electronic influences would also guide material he is currently writing with CHILI PEPPERS, the guitarist said: "That's what I do on my own. I've tried to do some of that kind of thing myself, breakbeats but with a rock music chord progression or whatever. I just think it's kind of cheesy, and that's not what I'm trying to do with the CHILI PEPPERS."

Frusciante rejoined RED HOT CHILI PEPPERS after the dismissal of Josh Klinghoffer, who had been in the band for 10 years.

Klinghoffer, who took over for Frusciante in 2010, told Rolling Stone that he received the news from his bandmates during a meeting at bassist Flea's house. Klinghoffer said he suspected the seeds for Frusciante's return had been planted far earlier, with the guitarist reaching out to singer Anthony Kiedis and their tour manager as much as 18 months prior.

He explained: "[John] was definitely showing his face in CHILI PEPPER world a little bit just with emails and apologizing about past behavior. So every time I would hear a story about that, I thought, 'What is he doing? Does he want to come back?'"

Klinghoffer said his firing was "a total blindside" as the band were "so far into the writing of a new record," adding, "Here was an album that was more than half written, but I guess I let my guard down because I thought we had done so much work." Klinghoffer said he expected the band to scrap the music they worked on and start over. The guitarist also said that he was "not particularly fond of the two records" he wrote and recorded on — 2011's "I'm With You" and 2016's "The Getaway".