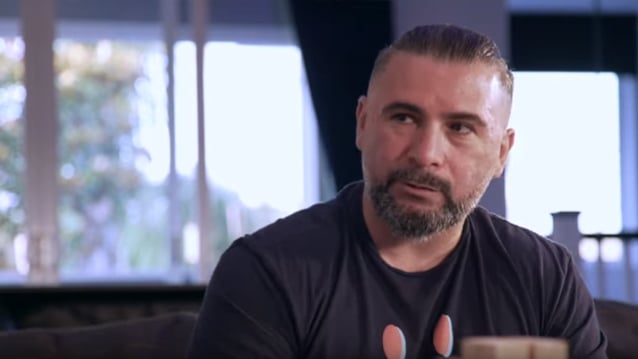 SYSTEM OF A DOWN drummer John Dolmayan has admitted that his band played "a couple of shows" recently that he "was not proud of."

The Serj Tankian-fronted outfit has toured intermittently since ending its hiatus in 2011 but has yet to record a follow-up to its "Mezmerize" and "Hypnotize" albums, which came out in 2005.

Dolmayan talked about SYSTEM's lack of activity during an appearance on the latest episode of "Drinks With Johnny", the Internet TV show hosted by AVENGED SEVENFOLD bassist Johnny Christ.

Speaking about SYSTEM's inability to release any new music in a decade and a half, John said (see video below): "We've been enormously successful with each other. So, ego gets in the way a lot. It gets in the way of relationships, it gets in the way of business relationships, and sometimes you lose sight of why you started to do something together. In any industry, but more so in music, people get into their heads sometimes. You've gotta let things go in life. You have to let things go in that you're gonna offend each other, you're gonna have problems. Every relationship has them. So you've gotta get past it and get out of your own fucking way ultimately, and SYSTEM just hasn't been able to do that. We have some things that have gotten in the way of doing what we do best."

Dolmayan went on to point out that each member of SYSTEM OF A DOWN has released music on their own since the arrival of "Mezmerize" and "Hypnotize". But, he noted, "I'm the best when I've got Serj [Tankian, vocals], Shavo [Odadjian, bass] and Daron [Malakian, guitar/vocals] with me. And nothing I do in music will ever compare with that. And I'm aware of it, I'm appreciative of it. I've got, in my opinion, one of the best live bands in the world. With all due respect to everybody else — everybody else is everybody else. We're SYSTEM OF A DOWN. That's how I look at it."

According to Dolmayan, SYSTEM's relative inactivity on the live front has had a negative effect on the band's live performances, especially in last year.

"I'm gonna be honest with you — we played a couple of shows that I was not proud of recently, because we didn't put in the practice, and we had, like, a skeleton crew," he explained. "They [are the ones who] set up the equipment, they set up the lights, all the production. All this stuff has to be set up so that we can go up and do our jobs, which is to entertain you ultimately. And these guys all have to work when we're not working. AVENGED does it the right way — they'll do an album cycle, they'll do a hundred shows, or whatever it is in that cycle, which means they can employ these people for a year to two years. SYSTEM does it the complete opposite way and half-assed. We employ people for three to four weeks, which means we get who's available as opposed to who we wanna work with long term."

John also confirmed that he is working on a covers album, which will include a guest appearance on one song by AVENGED SEVENFOLD singer M. Shadows. "It's a lot of fun," he said. "I worked with really cool people… Again, I'm not trying to create something to compete with SYSTEM. I'm just doing it because I enjoy playing music. I'm not a songwriter, but I can arrange the fuck out of songs. So, I arranged these songs in a way that I thought was interesting and I listened to songs that I thought maybe there was a lack. Or what would I do if I played this song? What would I do if I was presented this song?"

Last year, Malakian publicly accused Tankian of not wanting to record, with Tankian responding that creative and financial issues with Malakian led to the stalemate. In a message on Facebook, Tankian wrote that Malakian wanted to control SYSTEM's creative process, take more of the publishing money and be the only band member to speak to the press.