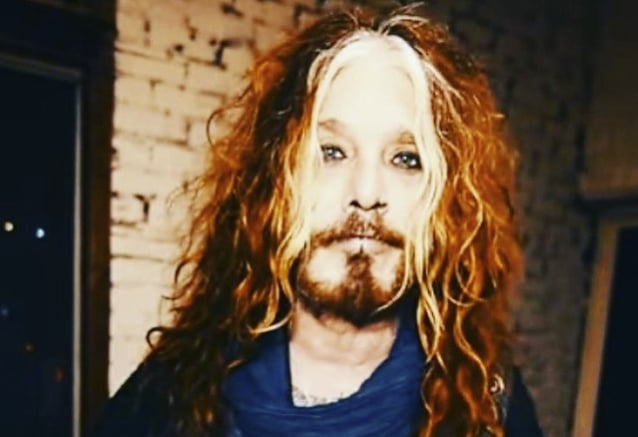 Former MÖTLEY CRÜE singer John Corabi says that fans calling for him to return to the band should "let it go."

Corabi joined CRÜE in 1992 as the replacement for the group's original singer, Vince Neil, who was dismissed due to personal differences. With Corabi on vocals, MÖTLEY CRÜE released one critically acclaimed full-length CD, which ended up being a commercial failure in the wake of grunge despite a Top 10 placing on the album chart. When Neil returned to the fold in 1997, Corabi was left on his own and formed the band UNION with ex-KISS guitarist Bruce Kulick.

After a recent article emerged online claiming — falsely — that CRÜE bassist Nikki Sixx issued an ultimatum to Neil to lose a significant amount of weight for the band's comeback tour or be fired and replaced by Corabi, John posted a statement on social media denying that he had held "secret rehearsals" with CRÜE and shooting down the possibility of him rejoining the band, saying that he was "not even remotely interested in doing that again."

On Wednesday (September 8), Corabi took part in a video interview with Let's Rock in which he once again touched upon the rumors of him reuniting with CRÜE.

He said (as transcribed by BLABBERMOUTH.NET): "I made a post this morning. I got up and I had a gazillion e-mails on [the above-mentioned article].

"Last week, somebody posted that after a performance Vince did, all the fans are saying Corabi's gotta come back. Then, about three days later, there was a thing, like, 'Nikki orders Vince to lose 50 pounds or to bring in Corabi back.' And now today I get up and there's this bullshit. And I'm, like, fuck, man. Let it go. I did that fucking record, like, 30 years ago. I'm proud of it, it's a great album, but fuck off. It's been 30 fucking years. Let it go.

Asked point blank if he is returning to the CRÜE, Corabi said: "I'm just gonna level with you. After the incredibly fucking pathetic, stupid performance, or my portrayal in the fucking movie 'The Dirt', and then, I won't mention his name, whatever, but a certain bandmember's comments about my lack of writing talent and my contributions to the record, I'm, like why would I do that to myself? Fuck off. Done. It's been put to bed. Moving on.

"I had a great time doing the record; I had a great time with the guys," he continued. "Something went south probably about 10 years ago. I have no idea what it is; I can't put my finger on it. Nor do I care."

Corabi in 2016 said that he would avoid talking about MÖTLEY CRÜE in the future because he didn't want his comments about Sixx to descend into a feud.

In an interview with Sweden Rock Magazine, Nikki said that writing the "Mötley Crüe" LP with Corabi was a prolonged and difficult experience. He went to call it "a very unfocused record" that was "painful for me, because John Corabi can't write lyrics, and I had to do all that work."

In February 2018, Corabi released a live album of his performance of MÖTLEY CRÜE's entire 1994 self-titled album, recorded on October 27, 2015 in Nashville, Tennessee. "Live '94: One Night In Nashville" documents the album in its entirety along with the bonus track "10,000 Miles", which was originally released as a bonus track on the Japanese version of the "Quaternary" EP.

Corabi recently completed work on his autobiography. Titled "Horseshoes And Hand Grenades", it was written wih the help of MÖTLEY CRÜE historian/author Paul Miles, and is due on April 12, 2022 via Rare Bird Books.