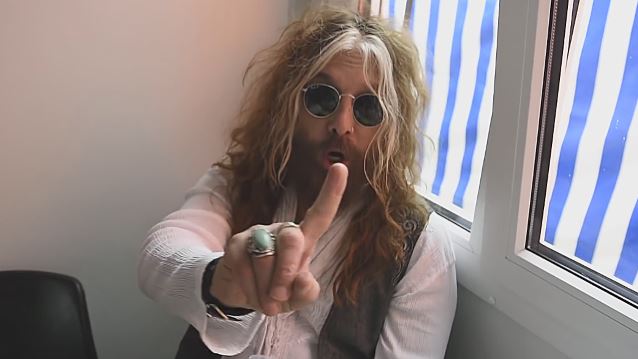 Former MÖTLEY CRÜE and current THE DEAD DAISIES singer John Corabi who had a seven-year stint (2001-2008) as the rhythm guitarist in RATT, has once again commented on the ongoing legal battle between drummer Bobby Blotzer and other members of RATT's classic lineup — singer Stephen Pearcy, bassist Juan Croucier and guitarist Warren DeMartini — over the rights to the group's name.

Speaking to music writer Joel Gausten, Corabi said: "Listen, I love Warren and Stephen. I've never really worked with Juan and Carlos [Cavazo, current RATT guitarist] before, but I worked with Warren, Stephen and Bobby. Each one of those guys is his own animal. I love them to death, but you've got to kind of figure out how to play each one of them or know how to communicate with each one."

He continued: "Honestly, as much as I love those guys, they've always been dysfunctional — always. If Warren would say to Bobby, 'Hey, the song is too fast,' Bobby would say, 'Go fuck yourself! I've been playing it this way for 25 years; I know what I'm talking about.'

"If I can be frank, the minute they got their record deal with Roadrunner [for 2010's 'Infestation' album] — and you can ask [former RATT bassist] Robbie Crane or anybody who was involved with the band — and said, 'Hey, we're doing a record! We signed the deal; it's on,' I told them I quit! [Laughs] [I said], 'I can't get through a fucking rehearsal with you guys, let alone eight months writing and recording. No!' I can't picture doing it. It would be like performing brain surgery on yourself through your asshole. I just said I wasn't interested."

Corabi added: "I don't know; I don't see any settling [of] that whole debate. I don't think that Bobby deserves the name; if anything, it does belong more to Warren, Stephen and Juan — at least they've got more original members than Blotzer's take… Until they figure out how to talk to each other reasonably, I don't see any bright future for that thing at all."

RATT — featuring DeMartini, Pearcy and Croucier — has played several shows so far this year after reforming in 2016 in the midst of a highly publiced legal battle with Blotzer over the rights to the RATT name. They were joined at the gigs by former QUIET RIOT guitarist Carlos Cavazo, who played on RATT's last studio album, 2010's "Infestation", and drummer Jimmy DeGrasso, who previously played with Y&T, WHITE LION and MEGADETH, among others.